David Plouffe to ABC: GOP Plan to Run Against Obamacare an ‘Impossibility’ 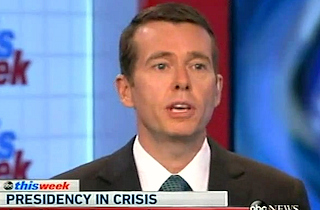 On This Week With George Stephanopoulos Sunday morning, former Obama advior David Plouffe dismissed the comparisons between the second terms of President Barack Obama and former President George W Bush—who have similar approval ratings at comparative points in their presidencies—and also argued that Republicans would be unable to run against Obamacare once it’s working.

Guest host Martha Raddatz had asked if the troubled Affordable Care Act rollout was a “political Katrina,” an analogy that’s been making the rounds.

“First of all there’s a qualitative difference between people dying in New Orleans and people not able to get health care,” former Bush advisor Matthew Dowd said. “But from a political standpoint it’s eerily similar to President Bush in the fall of 2005.”

RELATED: Bob Woodward to Fox: Obamacare Isn’t ‘Watergate,’ But It Will Get Worse

“I disagree,” Plouffe responded. “I think Iraq was going on, which was getting more and more unpopular, the economy was beginning to soften. It’s hard in these feeding frenzies in Washington to have perspective.”

“But where could we be in four or five months?” Plouffe continued. “Hopefully the website is working fine and people are enrolling for health care. Hopefully, we won’t have another Washington dysfunction—which is one of the reasons people are upset, it’s not just health care—and we pass a budget and move forward, and the economy continues to strengthen. So we could be in a much different place three, four months from now. No doubt this is challenging time, but I think you have to have some perspective here. The story could change.”

“The political notion that next year’s election, or 2016, the Republican platform is going to be getting rid of health care?” Plouffe continued. “Millions of people will be signed up. It’s an impossibility.”