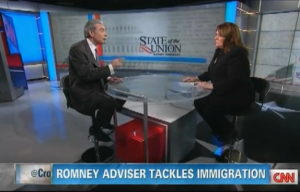 Candy Crowley took a look at the Latino vote on this week’s State of the Union. Noting how strongly the president performed among Hispanic voters, she observed how Mitt Romney‘s winning only 27 percent of the Latino vote is “worrisome” for the party and “close to hurtful” for Hispanic Republicans. Carlos Gutierrez, who led the Romney campaign’s Hispanic outreach, was invited to respond. And he wasn’t pleased.

Gutierrez noted that Republicans who believe in comprehensive immigration reform are creating a super PAC to tackle the issue. It’s “something that can have real influence on the outcome of elections,” he said.

Inevitably, Gutierrez was asked to respond to Romney’s “gifts” remark, wherein the former presidential hopeful asserted that the president won re-election due to the “gifts” he have to key demographic blocs. (Namely, minorities and young voters.)

“You would admit, though, that your candidate said a lot of things seen as anti-Latino,” Crowley followed up. “You yourself said that they fear the Republican Party, and he was the head of it.”

“And that is true, and, you know, the unfortunate part and we were just talking about this, I don’t know if he understood that he was saying something that was insulting,” Gutierrez said. “The language, the attitude, the body language, that’s what Latinos watch.”