George Will: Rand Paul Is Not Racist, He’s Just ‘Frivolous’ 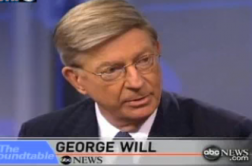 Can anyone remember the last time the winner of a state primary election got this much attention? Even in the midst of the BP Oil spill and increasing tensions between North and South Korea the dominant subject on the Sunday talk shows was Rand Paul and his explosive remarks regarding the Civil Rights Act.

Fear not, says George Will. Rand Paul is not a racist. He is merely frivolous.

The simple fact is that in 1964, we, as a nation, repealed one widely-exercised right – the right of private property owners to serve on public accommodations whom they want – and replaced it with another right, that is the right of the entire American public to use public accommodations. We were correct to do so and in the process, we refuted an old notion: that you cannot – and this may offend some libertarians – the notion was you cannot legislate morality. Yes you can. We did. We not only got African-Americans into public accommodations, we changed the thinking of the white portion of the country as well.

He doesn’t understand that his job is to win a Senate seat, not conduct a seminar on libertarian philosophy. I’m going to hazard a guess he understands it now! Possibly with some help from Karl Rove. Video of the segment below.