Good For Touré: MSNBC Host Refuses To ‘Lie’ To His Kids About Santa ‘Myth’
video

Good For Touré: MSNBC Host Refuses To ‘Lie’ To His Kids About Santa ‘Myth’ 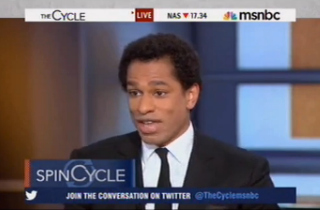 It’s been well-documented here at Mediaite that I disagree with MSNBC host (and lover of “paternalism“) Touré on a wide swath of issues, but my how the holidays can bring people together.

During a cute segment on what The Cycle hosts did for their respective Christmas celebrations, Touré shocked his colleagues (and plenty of viewers) by saying that he refuses to lie to his children about the existence of Santa Claus, instead allowing his kids to pick out their own presents and not think that some “stranger” magically places gifts under the tree overnight.

“My 5-year-old and 3-year-old, we didn’t talk about Santa at all,” he explained. “I went shopping with them and let Hendrix pick out a present for himself and his sister. He is good at picking out for his sister. The idea that the presents did not come from us never came up. It never occurred. We put out the presents before bedtime on Christmas Eve. There was no myth that some stranger is going to come in through the door.”

Co-host Krystal Ball had just explained her daughter’s cute Santa-related story, and so she proceeded to tease Touré and call his parenting decision “lame.”

“I’m sorry. We didn’t lie to our children,” he shot back. “I don’t think that that’s lame, but whatever. Judge not.”

Such a revelation predictably drew the ire of some viewers:

Relax, people. Of course, his comments hilariously reflect his reputation as your typical Brooklyn liberal who is too “progressive” to lie to his children about such lowbrow things like Santa Claus and magical reindeer. That is most certainly eye-roll worthy.

But on the other hand: Touré’s comments underscore an important point about the so-called and over-hyped “War on Christmas.”

While conservative commentators of all stripes foam at the mouth over “seculars” who want to tear down the holiday with such blasphemous phrases like “happy holidays” and “holiday tree” and popular depictions of Santa as a sex-haver, they seemingly forget that Christmas trees… the gifts under it… Santa Claus… and the date December 25th itself… are all myths.

Touré’s abstinence from Santa is, in some twisted way, perhaps more faithful to Christianity than the conservative warriors who shout down any hint of secularization of Christmas imagery.

None of those cultural icons are rooted in the actual religiosity the Christmas Warriors hold dear. They were all, in fact, pagan rituals adopted by early Christians to try and blend in with the pagan Roman society.

The Christmas tree? Prior to Jesus Christ, pagans had worshipped trees in the forest for centuries, often bringing them home to decorate. The practice was adopted with a Christian makeover by the Catholic church as a clever recruitment tool.

Gift-giving? Pre-Christian Romans were often compelled to bring gifts of tribute to the emperor during the holiday of Saturnalia — a ritual which later expanded to gift-giving among everyone else. Once again, as a clever recruiting tool, the Catholic Church took this pagan tradition and gave it a makeover under the guise of Saint Nicholas. Many now tie the gift-giving to the Three Wise Men who visited Jesus after his birth, bearing gifts of gold, frankincense and myrrh.

Speaking of which: Santa Claus? Ol’ Nicholas has origins in German paganism and only became the famously jolly red-suited character, whom Christmas Warriors so ardently defend, as a result of commercial artistry. The man we know today is actually a historical combination of pagan god, commercial icon, and, to a much lesser degree, Christian crusader.

And the date December 25 itself? The New Testament actually gives no date or year for Jesus’ birth. But in order to recruit Roman pagans into the fold, the Church chose the final day of the popular pagan holiday Saturnalia (Dec. 25) as the date of the Nativity as a way of convincing the new converts that they could keep their old rituals.

This is not to justify attacks on displays of Christmas iconography on private property. Your property is your property and it’s none of anyone else’s business what you choose to put up. But supposedly religious (but not actually religious) displays on public property is, indeed, fair game. Most people who are offended by public Christmas displays are just PC Police types who are worthy of exaggerated eye-rolls. And the knee-jerk offense-taking is, indeed, annoying. But that doesn’t excuse putting religion on public property.

But while Touré’s decision to shield his kids from a harmless holiday tale is, as Ball said, “lame” to some degree (Come on! They’re kids! Let them dream), I’d like to preemptively shut down conservative criticism of the MSNBC host as being a “secular progressive” or “anti-Christian” as being downright silly… and actually kind of hypocritical.

As Fox’s in-house religion analyst Father Jonathan Morris tried to convey to a perpetually-upset-about-the-War-on-Christmas Fox & Friends, the season isn’t really about defending trees, red-suited characters, and holiday retail display signs, but rather it’s really about love and brotherhood and kindness — you know, the actual Judeo-Christian values worth fighting for.