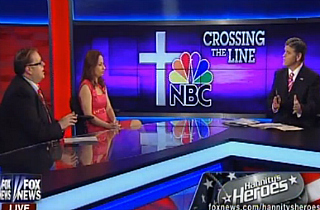 Fox News radio host Todd Starnes appeared on Hannity tonight, and so you know what that means: OUTRAGE!

What’s got Starnes clutching his Bible this time? Why, of course: Saturday Night Live‘s controversial “Djesus Uncrossed” sketch from this past weekend.

Just as a quick refresher of what went down during said skit: Spoofing Quentin Tarantino’s Django Unchained, SNL put together a fake trailer for Djesus Uncrossed featuring Christoph Waltz as Jesus Christ. “Guess who’s back,” Jesus says as emerges from behind a giant boulder and faces the sunlight. And then a two-minute bloody revenge fantasy ensues with Jesus gunning down his enemies. “He’s risen from the dead, and he’s preaching anything but forgiveness,” says the voiceover.

Pretty funny stuff, given SNL‘s lack of creativity lately. But naturally, Christians were out in full force calling it “the most blasphemous skit in the show’s history.”

“Oh, of course there is,” Starnes predictably answered. “People need to understand something: Jesus wants to be your lord and savior, he doesn’t want to blow you to kingdom come.”

Thanks for the biblical lesson, Mr. Starnes, but many people also interpret Jesus’ teachings to mean not constantly whining about gay people or — more importantly — not waging inquisitions, crusades, and wars against non-believers. But that hasn’t stopped Christians from doing those exact things for centuries, has it?

He continued: “What we saw happen on Saturday night was the worst example I’ve seen of anti-Christian bigotry on network television and folks over at 30 Rock ought to be ashamed of themselves.”

Cue exaggerated eye-roll. Anti-Christian bigotry? Sheesh. Lighten up. It was just a reappropriation of the Django story with a main character who was similarly oppressed by those in power. Black people don’t inherently believe in violence, but you don’t see them lining up to picket Tarantino for being “anti-black” because he portrayed them engaging in a bloody revenge fantasy. Same goes for Jews and their relationship to the actions shown in Inglourious Basterds.

As the outragey segment played on, it became apparent that this was more about beefing with the liberals at NBC and the fact that Muslims are much less often the subject of parody.

“They’re cowards and terrified what would happen in the event they did one of those skits bashing Mohammad or for example, putting out a mock movie trailer, ‘Jihad Undecimated.'” People would go ballistic in New York City and it’s outrageous what they did,” Starnes ranted.

And then he took the opportunity to run off one his many examples of how “Christianity is being destroyed” in America or whatever: “A few days ago, NBC had a reporter on the air, when the Carnival cruise ship came in they had two young ladies one wanted to quote a Bible verse on the air and that reporter cut her off — what does it tell you about what’s happening at NBC?”

Hannity rightfully pointed out that there is seemingly a double standard in that artists don’t mock Muslims because of the severe blowback they’d receive — i.e., Salman Rushdie‘s fatwa or the threats made against South Park for depicting Mohammed.

Liberal contributor Julie Roginsky chimed in that the backlash against Mohammed depictions is “absolutely ridiculous” and so is “this backlash” over an SNL skit. “If you don’t like it, change the channel,” she said.

But no, we need to hear more about how NBC was being anti-Christian. Take it away, Todd Starnes: “It’s open season on Christians in this country. And it’s not just the networks; it’s happening in everyday life. For some reason, we live in a culture believe it’s okay to bash Christians — it’s almost as if we deserve it. And that’s why we’re seeing these people coming after Christianity.”

Just a thought: perhaps things like the SNL sketch are made in jest; and not some insidious attempt to destroy Christianity.

While the two conservatives do have a point that Mohammed jokes are lacking — likely because of the fear of retribution — I’d venture to guess that Starnes would still be whining about such “anti-Christian” SNL skits even if the ratio were more equal.

The playwright Edward Albee once said something that perfectly describes Starnes in this instance: “I have a fine sense of the ridiculous, but no sense of humor.”

Watch the outrage-fest below, via Fox News: