Herman Cain Tells Piers Morgan That He Is Anti-Abortion, Yet Pro-Choice? 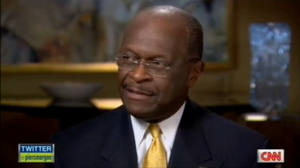 Tonight, Herman Cain sat down with CNN’s Piers Morgan to discuss his stance on a variety of issues. And it would appear that, where abortion is concerned, Cain is “anti-abortion in all cases,” yet “pro-choice.” Interesting, yes?

Let’s delve into the nuts and bolts of his beliefs:

First, Morgan asked Cain about his thoughts concerning homosexuality. Cain explained that, because of his religious beliefs, he believes that homosexuality is a sin in addition to considering it a choice. Morgan seemed not to buy the sincerity of Cain’s belief in the latter, but Cain held his ground, adding that neither Morgan nor anyone else has been able to offer him sound scientific evidence to convince him that a person is born homosexual rather than choosing to become gay at some point in one’s life. That said, he believes gay Americans have a right to make that choice, and “you don’t see me bashing them for it.” Furthermore, “I respect their right to make that choice,” even though “I don’t have to agree with it.”

Later, Cain conceded that Morgan “might be right” about homosexuality being something inherent and not chosen, and maintained that homosexuality as choice is “his opinion.”

Morgan, moving on to the next point of discussion, then asked Cain about his thoughts on contraception and abortion. Cain believes, evidently, that life begins at conception and is personally against abortion, no matter the circumstances surrounding that choice (including, say, a child conceived through rape and/or incest). There followed some hugger-mugger over whether Cain would still be against abortion if his daughter or granddaughter happened to be raped — which is silly, of course. If you’re against something as a matter of principle, it means you’re firm enough in your conviction to have it hold in all cases. To do otherwise, to make special allowances for one’s kin or close friends, would be hypocritical, and hypocrisy is something no candidate is going to readily admit to, ever.

And yet, interestingly, here’s what Cain said to Morgan concerning abortion for people who are not his family members:

No, it comes down to is, it’s not the government’s role — or anybody else’s role — to make that decision. Secondly, if you look at the statistical incidents, you’re not talking about that big a number. So what I’m saying is, it ultimately gets down to a choice that that family or that mother has to make. Not me as president. Not some politician. Not a bureaucrat. It gets down to that family. And whatever they decide, they decide. I shouldn’t try to tell them what decision to make for such a sensitive decision.

Morgan then said that Cain cannot hide behind the “mask of the pizza guy,” and that, as a person who may potentially become president, his views on issues like abortion become “a directive to the nation.” Cain’s response?

No, they don’t. I can have an opinion on an issue without it being a directive on the nation. The government shouldn’t be trying to tell people everything to do, especially when it comes to a social decision that they need to make.

So, there you have it: Herman Cain is against abortion, personally, but is firmly pro-choice, as he believes the government should not intervene in social decisions. And that extends to same-sex marriage, by the way. As you may recall, Cain said recently, during an appearance on Meet The Press, that “I wouldn’t seek a constitutional ban for same-sex marriage, but I am pro-traditional marriage.”

Watch the interview for yourselves, via CNN: