Imus: I Would Vote for Hillary Because She’s ‘Ruthless,’ Lacks ‘Humanity’ 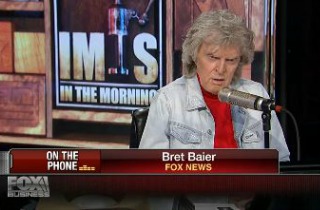 Conservative radio host and Fox Business Network personality Don Imus dug into the details of a new book on the life and political history of former Secretary of State Hillary Clinton on Thursday in an interview with Special Report anchor Bret Baier. Imus revealed to Baier that he would vote for Clinton because he believes that both Clinton and her husband, former President Bill Clinton, are “ruthless” and would aggressively safeguard American interests abroad.

Baier displayed a lack of enthusiasm while talking about POLITICO reporter Jonathan Allen and The Hill’s Amie Parnes new book, HRC. He said that some think that the book “could have been tougher” on the likely Democratic presidential contender.

“I would actually vote for [Clinton],” Imus said, though noting that he found her congressional testimony on the Benghazi incident “repulsive.”

“You know why I’d vote for her?” Imus asked Baier. “I would vote for her because of her husband – because they’re the two most ruthless people on the planet.”

“They’re willing got get even with people,” he added. “I think they would conduct, for example, a lot tougher foreign policy than we have now.”

“The thing they lack, I think, is any kind of humanity and the willingness to admit that they’re wrong,” Imus continued. “I don’t think I’ve ever heard either one of them apologize for anything.”

Watch the clip below via Fox Business Network: