Ingraham: Obama Has ‘Given Up’ Persuading People, Wants to Be ‘King for a Day’
video

Ingraham: Obama Has ‘Given Up’ Persuading People, Wants to Be ‘King for a Day’ 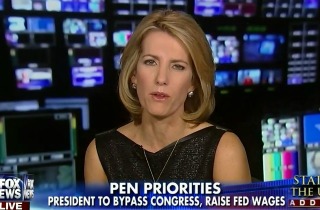 Conservative radio host Laura Ingraham told the hosts of Fox & Friends that President Barack Obama heads into his fifth State of the Union address on Tuesday with a general distaste for the American system of government. She added that Obama appears “annoyed” by the checks on executive power and said that he would prefer to preside over an “imperial presidency.”

“I think at this point we can conclude that the president has basically given up on persuading people that his course for the country is the right course,” Ingraham began.

“The president has been annoyed with the checks on his power,” she continued, citing Obama’s recess appointments and his backing of the Senate Democrats invocation of the “nuclear option.”

RELATED: Ingraham: Income Inequality ‘Is a Problem’ and It’s ‘Gotten Worse Under Obama’

“He’s annoyed by the fact that he can’t just redistribute when he wants, promulgate laws when he wants to, and I think it speaks to a real dislike of almost of our whole governmental system,” Ingraham said.

“That’s kind of in line with his overall philosophy,” she added. “That we’re kind of corrupt to the core, our whole system of government, and he thought he was going to come in and right the whole thing for us by the sheer force of his personality.”

“You understand why a lot of people out there both have little to no respect for what’s happening in Washington, and why people think this is truly the imperial presidency,” Ingraham concluded. “The president wants to just be king for a day and, unfortunately, this day it seems like it’s never ending for the American workers.”