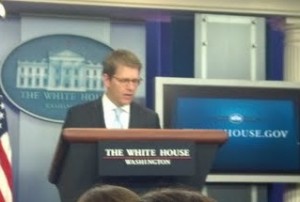 Whatever they’re putting in Jay Carney‘s birthday cake, I want some. During a gaggle aboard Air Force One today, the just-47 White House Press Secretary woke up a sleepy press corps with a rant about fact-checking Republican talking points that, relatively speaking, nearly veered into Sam Kinison territory. Quoting from a recent MarketWatch commentary, Carney told the press “do not buy into the BS” about the Obama spending record, and that “doing so is a sign of sloth and laziness.”

The substance of Carney’s rant is really quite simple: you see Republican flacks appearing on cable news shows all the time spouting unmitigated garbage about President Obama exploding the debt, choking off US oil production, overregulating businesses, and spending like a drunken Romney, while rarely being challenged on the facts.

What’s remarkable about this is that, in over three years of covering this White House, I don’t think I’ve ever seen anything remotely interesting come out of an Air Force One gaggle. I usually peruse the transcripts just to stay on top of things, but the gaggles are normally brief, matter-of-fact affairs. Additionally, Carney wasn’t even provoked to go the eff off, he just did it. After answering a routine housekeeping question, Carney said this to the sleepy press corps:

Can I, since you guys are a little woolly-headed this morning, I just wanted to read something that I read this morning that caught my attention. This is from Market Watch’s Rex Nutting. He says, “Of all the falsehoods told about President Obama, the biggest whopper is the one about his reckless spending spree. Almost everyone believes that Obama has presided over a massive increase in federal spending, but it didn’t happen. Although there was a big stimulus bill under President Obama, federal spending is rising at its slowest pace since Dwight Eisenhower brought the Korean War to an end in the 1950s. Even hapless Herbert Hoover managed to increase spending more than Obama has.”

That means that the rate of spending — federal spending increase is lower under President Obama than all of his predecessors since Dwight Eisenhower, including all of his Republican predecessors. That is a fact not often noted in the press and certainly never mentioned by the Republicans.

MR. CARNEY: Not at all. I think it is simply a fact that despite the enormous challenges that this country faced when the President took office and the absolute essential need for taking dramatic action and significant action in passing a stimulus bill, as well as the other actions the President took, this President has been — has demonstrated significant fiscal restraint and acted with great fiscal responsibility. That is also why he has put forward a balanced plan to further reduce our deficit and debt by over $4 trillion.

I simply make the point, as an editor might say, to check it out; do not buy into the BS that you hear about spending and fiscal constraint with regard to this administration. I think doing so is a sign of sloth and laziness.

MSNBC’s Rachel Maddow somehow got ahold of some audio from the gaggle, which she played on tonight’s The Rachel Maddow Show, while challenging the press to go after Mitt Romney for claiming, two weeks ago, that “anything above 4%” unemployment would mean failure, yet telling Time’s Mark Halperin, today, that he, Mitt Romney, would be shooting for 6% unemployment by the end of his first term.

The takeaways here are that the White House is obviously getting fed up with the way the Beltway press is covering this horse race, enough to get Jay Carney to go Pulp Fiction medieval on their asses, and that Mitt Romney benefits greatly from the fact that he doesn’t have to face questions from a crack (if sometimes sleepy) press corps every day.