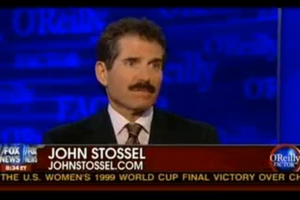 In one of the more straightforward discussions on libertarian politics on The Factor in some time, John Stossel‘s weekly feature yesterday took Bill O’Reilly through a number of political dangers the US has to face. Amid concerns about the spending and the burden of regulation, Stossel took on laws in San Francisco and what he perceived as the myth of politicians believing that the number of legislation passed is indicative of Congress’ quality.

Stossel cited what he perceived to be the biggest threats on American freedom, putting economic factors on top of the list. For one, there is the spending: “Overspending from the federal government is going to cripple the economy,” he told O’Reilly, and argued that the taxes against the middle class “takes away our opportunity to do what we want to do when we are going to be taxed.”

Stossel had not heard of the proposed laws banning the sale of pets of the sale of sodas in public areas, but was clearly ideologically opposed, and attacked what he described as “the assumption [that] passing more laws is what they [politicians] are there to do.” Instead, he suggests, Congress should operate on his eponymous Stossel rule and forced to repeal laws whenever they pass them.

O’Reilly accuses Stossel of subscribing to a worldview that would create a sort of dystopia where O’Reilly would have to constantly be telling ‘s “methamphetamine addicts” to get off his laws and “a bunch of free people doing whatever we want.” O’Reilly also brings up a great quote in the history of the quest for freedom but, sadly, Stossel attributes “freedom is just another word for nothing left to lose” to Bruce Springsteen.