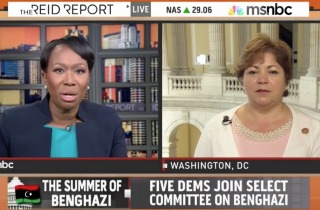 Rep. Linda Sánchez, one of the Democratic members of Congress appointed to sit on the select committee investigating the Benghazi attack, appeared on MSNBC with host Joy Reid. In that interview, Reid heavily scrutinized her and the Democratic House leadership for participating in that committee and “giving it legitimacy.”

“Did the Democrats decision to join just elevate the Republicans’ Benghazi circus to the big top?” Reid began. Introducing Sánchez, Reid asked the congresswoman if she had just “legitimized” what she already called a “kangaroo court.”

“The overwhelming feeling is that with the select committee, you want to make sure you have people in the room that are trying to make sure that the process is fair and as transparent as can be,” Sánchez replied.

Sánchez later chastised the committee’s chairman, Rep. Trey Gowdy (R-SC), for going after new evidence about how the administration responded to that attack which she said has already been provided to previous investigatory bodies.

“Then why couldn’t democrats ask those very questions from the sidelines?” Reid pressed. “Why sit on the panel and essentially allow Republicans to call it bipartisan?”

“Haven’t you essentially just emboldened Republicans?” she continued. “Whatever fishing expedition you do, you guys are the ones giving it legitimacy?”

“I don’t think that’s true,” Sánchez replied. “If you allow unfettered power, there is nobody to be the defender of the truth or to have the ability to question witnesses in a way that is fair and balanced.”