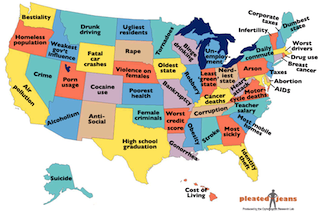 Novelty maps, like selfies and gluten allergies, have had a good run. It’s time for them to go away.

Novelty/viral maps — here’s forty examples — succeed for roughly the same reasons BuzzFeed quizzes do: they appear to compress a large amount of variables into one easily consumed widget; they briefly satiate our anxious thirst for identification, one by telling you which Game of Thrones character you are, the other what wacky, state-specific activities you and your neighbors are up to; and they square the internet circle of feeling personal while remaining endlessly shareable. (Combine the two and you get the New York Times’ most read article of 2013.)

The problem: the maps tend to be either misleading or meaningless, as more and more skeptical posts are pointing out. Slate’s Ben Blatt took a few viral maps to the woodshed last month, showing that their snapshots of data obscured trends and neglected proportionality. Vox’s Zach Beauchamp did the same this morning to a viral map purporting to show what each state Googled the most, and then demonstrated how the loose methodology could spit out limitlessly varying results. “Apparently, Kentucky, West Virginia, and Texas all have claims to be the derpiest state in the Union,” Beauchamp wrote. “That’s because putting random words into Google Trends is basically meaningless.”

The problem is exacerbated by the maps’ portability. There’s often real data behind them; but the specificity of the original prompt, the inherent imprecision of the number-crunching, the fuzziness of the results, the outliers, the qualifiers, all get shaved away when the maps are aggregated, retweeted, reposted. That’s how a map showing each state’s most distinctive artist became labelled internet-wide as Your State’s Favorite Artist. Those are not the same, as evidenced when the original mapmaker drew up a second map answering the second question. Texas’ most distinct artist is George Strait; Texas’ favorite artist is Drake.

One response to all this is: “So what, buzzkill? Maps about Drake are fun.” They are! But when our intake of news is increasingly graphic-driven and mobile-formatted, the line between novelty map and news graphic gets real blurry, real quick. In an admirable and thorough post today, Jacob Harris breaks down a slightly-newsier version of the novelty map, a highly-shared BuzzFeed/PornHub examination of whether red or blue states consume more pornography. (The post displayed the results in graph form, but using identical processes as a map.) Harris eviscerates the post, from its very premise to its methodology to its actual data to its presentation; at every step assumptions were made, proxies elevated, fallacies ignored. In an article about, say, a political poll, these contingencies are usually (though not often enough) accounted for; but in a map, they’re pushed off the page.

Harris’ point is well-taken: novelty maps, harmless as they seem, train us to accept results as a integral whole, when we should be doing the exact opposite: disintegrating the graphic to interrogate the data. If you need an example of what happens when this stops being fun and games, here’s a map from conservative think tank ALEC alleging to show the most competitive states for businesses, but in fact showing those states with the most ALEC-friendly economic deregulation: 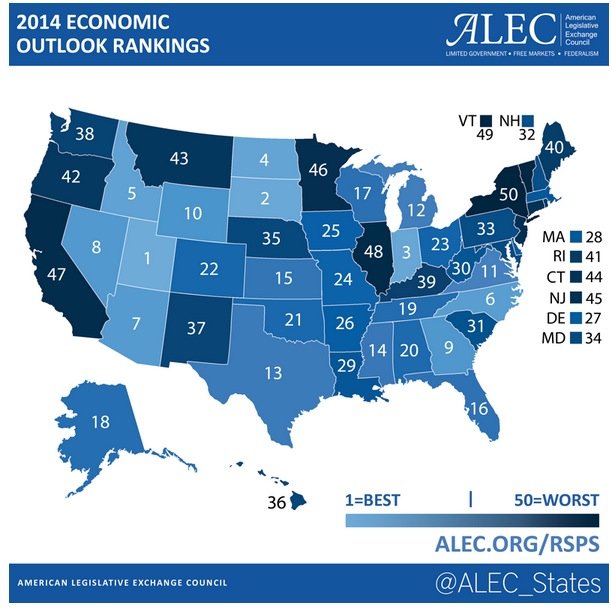 As Joe Weisenthal points out, it’s nonsense. But share it on Facebook, and who will be able to tell?