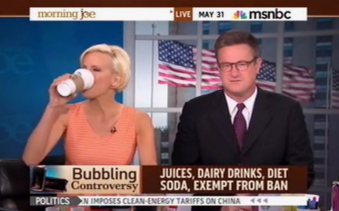 “I think it’s a great idea,” she said of Bloomberg’s proposed ban. “Does anyone want to challenge me on that?”

No panelist offered a challenge, but Donny Deutsch wholeheartedly agreed. Brzezinski added that the law will prevent children from obtaining large sugary drinks, which she described as “a big glass of poison.”

“Does anyone think their kid should drink this entire thing in the course of the day?” Brzezinski asked, holding up a clear container full of sweetened drink. “How about every day? How about three times a week? Well, guess what’s happening out there? That’s what’s happening. And that’s why the majority of the nation’s children are obese.”

But as the segment concluded, Brzezinski took a long sip from what looks like a Venti-sized Starbucks-sponsored cup of coffee.

And with that, Mika Brzezinski gives new life to the term “latte-sipping liberal.” By capping off the segment with a hearty swig from her large coffee cup, she embodies that exact sort of out-of-touch, “good for me but not for thee” liberal.

(Yes, lattes are exempted under Bloomberg’s proposed ban, but the long-used phrase “latte-sipping liberal” is not meant to be taken literally here.)

Why did no one call her out for this? The panel laughed as she drank, but it’s unclear whether they were laughing at her or at the joke Joe Scarborough made about having a custom cup-holder in his car.

Either way, the lack of self-awareness is rather hilarious.