Lawrence O’Donnell: Nugent ‘Does Not Have What It Takes’ To Pull Trigger, Seeing He Evaded Vietnam Draft
video

Lawrence O’Donnell: Nugent ‘Does Not Have What It Takes’ To Pull Trigger, Seeing He Evaded Vietnam Draft 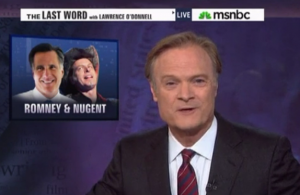 Lawrence O’Donnell addressed the Ted Nugent controversy on his show Tuesday night — asking, what if he or, say, Hilary Rosen had made such a comment? He specifically noted the lack of outrage from Republicans, and from Mitt Romney, who reportedly sought out Nugent’s endorsement.

Romney worked hard for the endorsement, O’Donnell said, because he needed “a prominent gun nut from the craziest segment of the right wing endorsing him since Romney used to be a supporter of certain forms of gun control.”

Citing the response from Romney spokesperson Andrea Saul, O’Donnell said Romney “knew exactly what kind of diseased mind he was begging to endorse him when he went after the prized Ted Nugent endorsement. Mitt romney is now the only presidential candidate who has a prominent endorser who is being investigated by the Secret Service, the very same Secret Service that now protects Mitt Romney’s life.”

Romney and Nugent have a lot in common, O’Donnell said: “they don’t mean a word they say.” He then pivoted to Nugent specifically, commenting on his record evading the draft during the war in Vietnam:

Ted Nugent’s homicidal rantings are obviously just figurative. He clearly does not have what it takes to aim a firearm at a human being and pull the trigger. He was offered a big opportunity to do that during the Vietnam War, and like his candidate, Mitt Romney, he managed to completely evade the draft, completely avoid military service — and then, of course, grew up to be a Republican warmonger in favor of all wars that don’t demand their services on the battlefield.