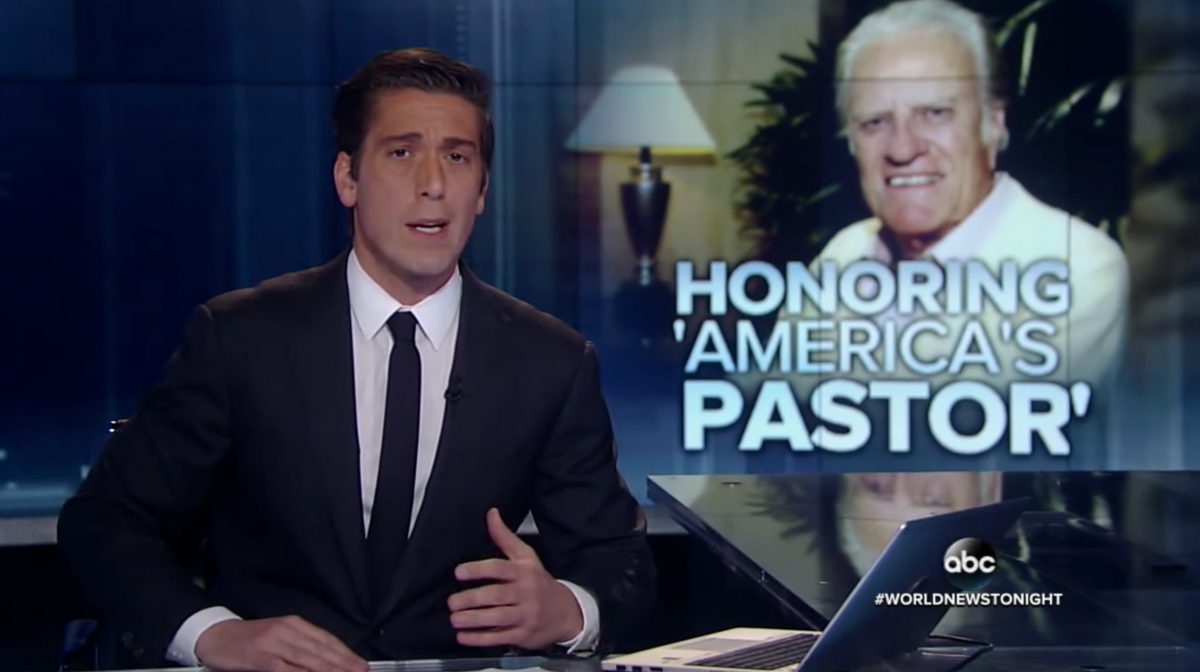 An ancient has died and his memory is being gifted a series of fawning tributes that minimize their negative qualities. That ancient, of course, is Billy Graham—the nation’s crusading and seminal televangelist. And now that his memory is being officialized in the public sphere, it’s time to point out that he was an aspiring war criminal.

To wit: a memo from Graham to Richard Nixon was published in April of 1989. The date on that memo was April 15, 1969. Graham drafted said memo after meeting in Bangkok with missionaries from Vietnam. The title of that memo is “The Confidential Missionary Plan for Ending the Vietnam War.”

Among the memo’s prescriptions for ending the Vietnam War was the following kernel and proof of Graham’s unchecked Godliness:

There are tens of thousands of North Vietnamese defectors to bomb and invade the north. Especially let them bomb the dikes which could over night destroy the economy of North Vietnam.

Graham’s memo circulated throughout the Nixon White House like napalm fire during the heady spring of 1969 and was looked upon quite favorably, but ultimately Nixon didn’t take the dike-bombing advice.

Good thing, too. Because it would have been a war crime.

Under established international customary law, civilian immunity is one of “the oldest fundamental maxims”. This prohibition extends to civilian infrastructure–which very much includes dikes and dams.

The status of the prohibition against targeting civilians was later codified in numerous articles and treaties, most prominently section 51(2) of Additional Protocol I to the Geneva Conventions–which was passed in 1977 and reads, in relevant part, “The civilian population as such, as well as individual civilians, shall not be the object of attack.” The prohibition has been reaffirmed time and time again. It is not controversial.

Prior to this codification, the status of the prohibition against targeting civilians enjoyed at least one instance of legalistic gloss and application. As Alexander Cockburn once noted, “The German High Commissioner Seyss-Inquart was sentenced to death at Nuremberg for breaching dikes and other crimes in Holland in World War II.”

But aside from the legal prohibition against bombing Vietnam’s dikes or civilian infrastructure generally, there’s also the moral-ethical dimension. By the estimate of working journalists at the time — and Nixon’s own White House — the dike-bombing policy would have killed upwards of one million innocent Vietnamese.

It’s shuddering and sobering to think a man of God would countenance this massive loss of life as acceptable in service of American imperialism. He’s dead now, though, so it’s time for his class to play cleanup.

Former President Barack Obama on Wednesday eulogized Billy Graham via Twitter as a “humble servant.” Vice President Mike Pence was also there for the tribute. Others followed suit — even President Donald Trump, who probably doesn’t know who Billy Graham is.

This sort of whitewashing and historiography of the elite, by the elite, and for the elite is commonplace in the United States. But Obama’s decision to wade into the flood waters of Graham’s memory is particularly telling: Graham was an aspiring war criminal. Obama is an accomplished war criminal. It all makes sense.

Did Graham have some redeeming qualities? Sure. He eventually rebuked his prior support for nuclear weapons and was in favor of de-segregating his worship services well before most liberals had even heard of the Civil Rights Movement.

Billy Graham held his first integrated rally in 1953, taking down the physical barriers himself. He wrote an article for entitled, “No Color Line in Heaven” for Ebony magazine in 1957. In 1963, he bailed MLK out of jail.

The Gospel is freely given, and all are welcome to it.

There’s tension here, too, though. Graham was notoriously anti-Semitic. He wanted America’s laws to target black folks after he thought the Civil Rights Movement went too far. He was famously homophobic and called AIDS “a judgment from God,” before eventually backtracking.

Graham’s points of decency are important to note—and have been noted in countless articles and farewells. But it’s also very important for people to have an accurate and thorough understanding of a man who carved out a highly influential role as a public intellectual and moral/ethical authority.

Pointing out Graham’s flaws and some of the horrific, sickening details of his life and his untoward, reactionary political positions isn’t the same as dancing on his grave or cheering his death. But it behooves no one to force an inaccurate portrait on the present and posterity just because some feelings might be hurt by the whole truth.

Mentioning the deficiencies of the dead is sometimes disapproved of — but the dead won’t care and the living deserve better.

After all, if Graham had had his way during the Vietnam War, there would be another million or so innocent Vietnamese lives blinked out of existence by the blunt force of empire. And though unfortunately still controversial in certain quarters in America, the lives and deaths of millions of Vietnamese matter a bit more than the image of one dead preacher.