Maddow Relentlessly Skewers GOP’s ‘Impeach Obama For Something, Anything’ Effort: ‘An Involuntary Tic’ 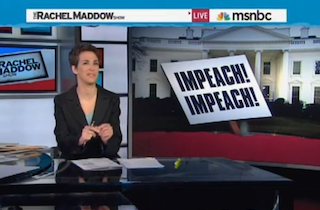 Amid the news cycle surrounding Benghazi, there’s been a bit of chatter about what some may call the “i-word.” Meaning: impeachment. Struck by the Republican fixation with President Obama’s potential impeachment, Rachel Maddow broached the topic on Friday, tearing into the “involuntary tic.”

Maddow chronicled various right-wing outlets that began whispering about impeachment nearly as soon as Obama was inaugurated. But it’s not necessarily about something specific, she noted: They like “the idea of impeaching” him. From gay marriage to Fast and Furious, Maddow ran through a laundry list of stories that represented the “Impeach Obama for Something, Anything movement.”

It’s “almost like an involuntary tic” how much those on the right enjoy talk about impeaching Obama, Maddow argued. And the latest reason is Benghazi, she noted, citing Sen. James Inhofe (R-OK). Noting that the critics sometimes point to Obama’s labeling the attack an act of terror and other times point to talking points, Maddow asserted the numerous ways the right has tried to paint the incident as a scandal. The reasoning depends on which hour of Fox News you’re watching, she quipped.

Going through each of the main criticisms, Maddow sought to take apart the arguments in a way to demonstrate that their outrage is overplayed. Today brought the most recent development: The report that the talking points were edited 12 times and scrubbed of references to terror. Coming to the end of her long-winded segment, Maddow finally arrived at the last criticism: “Why were you not prepared?”

This question, she said, is valid and important — and addressed “damningly” by the Accountability Review Board’s review. It was “brutal,” she reminded, adding that Clinton accepted all the recommendations. The question of preparedness, she repeated, is being examined and acted upon.

“But today,” Maddow concluded, “all of a sudden, apparently, for some reason: ‘Impeach! Impeach! We will figure out why later, let’s just impeach!'”