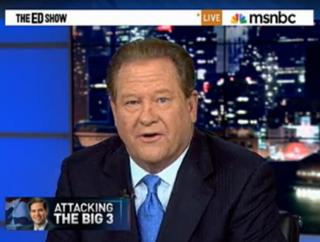 Towards the end of last week, Ed Schultz went on what MSNBC.com labeled an “epic rant” against Sen. Marco Rubio, demanding an apology on behalf of his parents for Sen. Rubio’s claim that certain entitlement programs are “weakening America.” In doing so, he called the Senator “not a real American” while reminding him that “as Americans” one must support said programs, and went through an history of his family that involved seemingly-irrelevant tidbits like “doing the World War II thing.”

For the most part, the media limited its analysis of the soundbites in Schultz’s 16-minute monologue to the fact that Schultz demanded an apology on behalf of his parents and a chance to debate the senator at the latter’s convenience (yelling at people for ignoring him is a bipartisan endeavor on The Ed Show). But these analyses leave out a number of subtle cues– some on the left would call them “dog whistles”– that serve to alienate the Senator on a personal level as “other” to the definition of American, a weighty and extremely offensive attack given the fact that Sen. Rubio is the son of Cuban exiles, and thus from a family that has only been in the United States for two or three generations.

Note, highlighting the common thread in the following quips is not calling “racism,” a practice so often employed it has dissolved into “boy who cried wolf” meaninglessness, but to examine how, especially to the finely-tuned ear of someone having lived through the exile family experience (like myself or those in my community), these pieces come together to create the subtext that Sen. Rubio isn’t “American” enough to weigh in on the functions of our state. This isn’t George Allen‘s “macaca” moment; this is Mitt Romney being “weird.”

Schultz couched the farcical demand that Sen. Rubio apologize to Mr. and Mrs. Schultz around a narrow definition of Americanism. The reason he believes in entitlement programs, he argues, is “because, as Americans, we have Social Security, we have Medicare and Medicaid.” He later directly calls Sen. Rubio “not a real American” for declining an invitation to the Ed Show— attendance at which, of course, is a rite of passage for every American. But by the time he gets to the heart of the matter– that Sen. Rubio isn’t a “real American”– he has whittled away significantly at that identity through the frame of his own experiences (emphasis mine):

My mother was a high school English teacher; my father was an aeronautical engineer who worked for the government. They paid into Social Security, they collected Social Security. My dad has his heart reworked and Medicare paid for it. And he paid into that system for years. My mom and dad raised five kids. My dad died with $900 in the bank. My dad was a man of character, he was intelligent, he loved the country, he obeyed the laws, and he was no dependent on anyone else because he worked his ass off throughout his entire country. [sic] And I want to tell you, Mr. Rubio, that my parents went through the Depression, and my parents did the World War II thing. My parents lived in the unselfish generation, and for you to say that they were lesser Americans because they were involved in Social Security and Medicare and Medicaid, you owe my family at least an apology— or at least be brave enough to give an explanation on this program in front of the camera as to what the hell you’re really talking about.

He later went on to say the “not a real American” line, and concluded that Rubio didn’t “give a damn about any of the Americans because, you see, it’s kind of in your make-up.”

To Schultz’s credit, he went into Sen. Rubio’s background and praised his family’s hard work, which served only as a recognizable smokescreen against the veiled language above. How the fact that he doesn’t consider the Senator a “real American” and blames it on something “in your make-up” can be easily interpreted as a barb against his national background is self-explanatory. The way he addresses Sen. Rubio regarding Schultz’s own family requires a bit more by way of explanation.

Sen. Marco Rubio’s parents, it goes without saying, are not Americans. This experience is alien to them, and makes them the minority in our country.

It is, based on the clip alone, impossible to answer whether Schultz’s language was deliberately woven to alienate Sen. Rubio and his family from the American experience in such a way. It takes a keen eye, often an eye with experience in being forced to look at such things, to understand how the package leaves the viewer with the impression that Sen. Rubio is not an American (not because he is a “coward,” but because he is an exile) and therefore should have no say in our politics.

Heavily loaded as the language was, it received almost no pushback at all in the media. There was no uproar similar to when Tea Party leaders use similarly questionable language against President Obama, or apolitical sports entities openly mock Asian-Americans. Republicans and Tea Party supporters of Sen. Rubio will be quick to blame the silence on ideology. To do that would be to ignore the unique place Cuban Americans have in the social fabric of the nation.

There is no Cuban “race card” because the population exiled here is erroneously believed to consist exclusively of well-off oligarchs kicked off the island (literally) by the forces of social Darwinism. It is true, in fact, that Cuban Americans are far better-off in terms of educational achievement and poverty levels, and that many who lost everything during the Revolution were once wealthy. Many others, especially those that came on the 1980 Mariel boatlift, were emphatically not. The population is also overwhelmingly Caucasian in relation to many other Latin American groups (with, perhaps, Argentines being the exception), and the most Republican of all the minority ethnic/racial groups in America. It is a sociological isolate in many ways, which in practice means it tends to be treated as a white ethnic group. In fact, aside from those in Miami and those who do not see him as American for sundry reasons, Sen. Rubio’s ethnic identity is probably not that different from Arianna Huffington‘s. It is not until someone nitpicks at the past– at things like not having experienced seminal American periods like the Great Depression– that the differences are exposed to fully reveal the minority that, on paper, Cuban Americans are.

While the unique position of the Cuban American population in America may make such veiled bigoted statements more difficult to spot do not make them more excusable. That is not to assign intent to Schultz– there is little to no evidence or history of discrimination on his part. In fact, just this morning Rick Sanchez, arguably the most prominent Cuban-American in American media, gave a warm shout-out to Schultz on Twitter (after a tweet decrying, of all things, racially incensed rhetoric). In actions, there is very little to suspect any such prejudice is manifest, and the lack of pushback can be partially attributed to this reputation. That does not justify the inexcusably divisive language, nor does it justify the silence from the media, especially compared to similarly offensive transgressions. If Schultz ever gets around to getting that apology to his parents from Sen. Rubio, he’d better save it, because he’s going to need something to pay back the Cuban-American people for such divisive rhetoric.