Megyn Kelly Grills Jindal on His Proposal to Restrict Muslim Immigration to U.S. 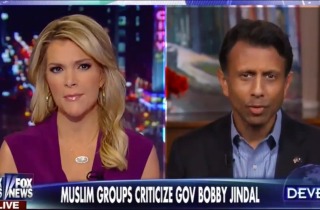 Gov. Bobby Jindal (R-LA) has generated controversy for himself, yet again, by proposing that the U.S. government reform immigration laws to actively exclude Muslims who might potentially “want to come and try to impose some variant of Sharia law.” On Wednesday evening, Fox’s Megyn Kelly pressed the governor a bit on whether such ideas violate fundamental American principles.

In recent months, Jindal has described Muslim immigration as an “invasion” of sorts. His recent suggestion on federal policy, however, has drawn the ire of Muslim-American advocacy groups alleging that he is attempting to “pander to society’s margins” to regain points in GOP primary polling.

“America’s built on religious liberty,” the governor told Kelly tonight. “We don’t discriminate against anybody of any religion and certainly there are many Muslims that are proud patriotic Americans. That’s great. It’s also true there are radical Muslims — Muslims that want to treat women as second-class citizens, those who want to use our freedoms to manager others.”

Kelly pushed back on the governor a tad. “Members of ISIS may be a different story,” she said, “but just to say that if you are a radical Islamist or, more specifically, if you believe in Sharia law, then you won’t be allowed into the United States is controversial.” She then asked: “Who decides how far into Sharia law you have to be? Who decides who’s a radical Islamist and who’s just an Islamist?”

Sensing an inherent contradiction there, Kelly asked of the governor: “Why don’t you have that right? Why not? This is a country with lots of crazy beliefs… [A]re we going to start banning everybody who doesn’t treat women or children or criminals for that matter the way we like?”

Jindal, in return, pivoted to comparing the United States to Europe, claiming that those countries have “second- and third-generation [citizens] that don’t consider themselves part of that society.”