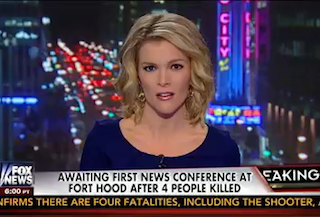 At the top of her Fox News show last night, Megyn Kelly picked up where Shepard Smith left off, reporting updates on the breaking news coming out of Killeen, Texas, where a solider had shot and killed three people and wounded several others before taking his own life at the Fort Hood military base. But one development she did not share with her viewers was the name of the shooter, which was first reported by CBS News as 34-year-old Spc. Ivan Lopez more than an hour earlier.

“Authorities are identifying the shooter,” Kelly informed her audience. “If you are interested you can get his name on other shows, like the one that preceded this one and online but we have decided not to name these mass killers here as a policy here on The Kelly File. Too often it is infamy they seek, and we decline to help.”

During the 8pm hour, Fox News, CNN’s Anderson Cooper 360 and MSNBC’s All In with Chris Hayes each reported the name of the shooter. MSNBC’s Rachel Maddow and Lawrence O’Donnell also reported the gunman’s name in the 9pm and 10pm hours, respectively, though according to transcripts it appears that the name was not said on CNN or Fox during those hours.

[Correction: This post originally stated that The O’Reilly Factor ran at 8pm on Fox. It was actually pre-empted by Shepard Smith’s NewsDesk.]