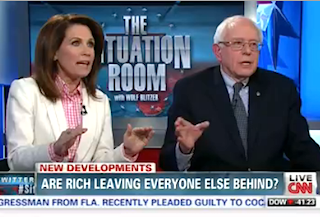 It was the type of shout-fest debate that would not have been out of place in the original Crossfire. But instead of taking place on the reboot of that show, Rep. Michele Bachmann (R-MN) and Sen. Bernie Sanders (I-VT) went head-to-head on CNN’s The Situation Room Monday afternoon. Once they go going, all host Wolf Blitzer had to do was get out of the way as these two ideologically-opposed lawmakers went at each other’s throats for nearly fifteen minutes straight.

The presumed topic was income inequality, which is expected to be a major focus of President Barack Obama’s State of the Union address tomorrow night. But over the course of the segment, the conversation coverage a large variety of related topics from early childhood education to Wall Street regulations and everything in between.

For much of the debate it appeared the Bachmann and Sanders were talking simultaneously, while a seemingly helpless Blitzer sat on the sidelines choosing not to moderate in the traditional sense.

When Sanders said Republicans want to cut Social Security, Bachmann shot back with, “That is absolutely a lie. It’s brought up all the time and it’s a lie. Let’s face it, Senator Sanders. you shouldn’t be lying about what our position is.” When he asked her directly if she supports “chained CPI” and raising the minimum wage, Bachmann would not answer, choosing instead to direct the points she was trying to make straight towards Blitzer. Meanwhile, Bachmann had to pause several times throughout the conversation to tell Sanders to “calm down.”

Somehow, Bachmann and Sanders emerged from the segment without causing each other any physical harm, but the emotional damage was done. “This was an excellent discussion,” Blitzer said when the whole thing was over.

Watch the full segment in all its glory below, via CNN: