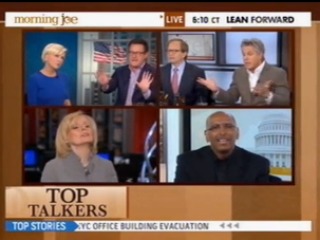 On Friday, the Morning Joe panel got into a heated argument over two of the week’s more controversial news stories: Rep. Allen West‘s comment about “communists” and Hilary Rosen‘s remark that Ann Romney had “actually never worked a day in her life.”

Host Joe Scarborough — who has been very vocal about his thoughts concerning West’s comment — asked former RNC chairman Michael Steele whether he thought Mitt Romney should distance himself from West, as some Democrats have from Rosen. Steele pointed out that that the two cases are very different because Rosen’s remark has become a widespread talking point, while many Americans probably remain unaware of what West had said. “I don’t know,” Steele ultimately responded, shrugging it off.

“Look,” said panelist Peggy Noonan, “the Ann Romney thing, the Hilary Rosen thing and the Allen West thing — they’re two separate things.” The rest of the panel then began to talk over one another, prompting Noonan to raise her voice. “That being having been said…” she continued, trying to quiet everyone down.

“Why are you connecting the two?” Steele asked Scarborough.

Here we have a cable news pundit that has shut down the political discourse over the past 24 hours when a sitting United States congressman says something deeply, deeply offensive. And no Republican has spoken out against that. Does nobody see there’s a little bit of inconsistency here, Peggy? Do you distance yourself from Allen West’s comments?

“I don’t need to distance myself, Joe,” said Noonan. “You are being mischievous.” These are two different stories, she emphasized, adding that West’s comment was nothing short of “absurd” and called back to an “unfortunate time” in our nation’s history.

“First of all, Joe’s point is either,” Donny Deutsch broke in, “we attach the President of the United States, any Democrat anywhere says anything, either that’s attached to him or it’s not the same way some idiot says something, it’s either attached to Romney or it’s not. The whole absurdity of this — and I’m actually getting angry — there are three hundred million people in this country, they’re not stupid. They can disseminate when a cable pundit says something stupid versus the Democratic point of view about women. It’s just… absurd, the cable news networks… We have all gotten so–”

Scarborough interrupted: “Do not attach us to other cable news shows.”

“Do you think one viewer, one voter has changed their opinion about Barack Obama or the Democrats because of what some women said on a cable news show on a given night?” Deutsch demanded.

Noonan later opined that the Democrats have just been “nailed” after trying to start a fight, and that they should now just “let it go.”