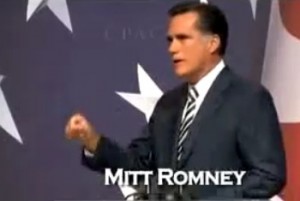 As if former Massachusetts Governor Mitt Romney didn’t have enough problems already, a story that connects him to the Ku Klux Klan has now entered the cable news bloodstream. AmericaBlog noticed that a phrase Romney has used, “Keep America American,” was also a rallying cry of the Klan in the 1920s. Now, MSNBC has reported on the story, which may prove hard for the cable news punditocracy to resist. However, there’s much less than meets the eye here.

The fact that the Klan used such a phrase isn’t surprising. “Keep America American” does have an unmistakable nativist ring to it, and on that basis, perhaps Romney has earned some criticism. He and his fellow candidates have turned immigration into a third rail with a nuclear reactor on it, mercilessly attacking any candidate who shows a scintilla of reason on the subject.

However, the AmericaBlog piece, entitled “Romney adopts KKK slogan: ‘Keep America American,'” is a bit of a stretch, and it’s kind of meant to be:

He’s said it repeatedly for over a year now.  Here is Romney a year ago, using the Klan slogan in a campaign ad.

In an era in which it’s apparently okay for Republicans to accuse President Obama of being a socialist, I guess we now need to ask if Mitt Romney is a Ku Klux Klansman.  Not whether Romney inadvertently is using the KKK’s number one slogan from the 1920s on the stump, no, the Republicans would say, if this were a Democrat, that clearly the candidate was a closet member of the KKK.  So, is Mitt Romney a closet member of the KKK?  Keep in mind, that even Romney is now claiming, between the lines, that President Obama is a socialist.  So why shouldnt’ America be asking if Mitt Romney is a Klansman?

First of all, there are only two examples of Romney using the phrase given, and I couldn’t find any others. That hardly constitutes “adoption” of a phrase, and the headline also implies that Romney has adopted it as a slogan, rather than that it’s a slogan that he has taken to saying. As far as that goes, I’d prefer almost anything to Romney’s actual slogan, Believe in America, as if our country is the Tooth Fairy, or a leprechaun, or science.

Also, the “campaign ad” they embed in the story doesn’t appear to be anything of the sort. It’s definitely not a Romney ad, and it doesn’t even look like a PAC ad, but rather, a homemade video by a supporter. It’s a small point, perhaps, because Romney did actually say “Keep America American” in that clip from CPAC, but it’s worth noting.

The blog post itself is intended more as a way to call Romney (and other “mainstream” Republicans) out for leveling the ridiculous charge of “socialism” at President Obama than it is about actually making the case that Romney is a kloset Klansman.

From there, though, the narrative has graduated to MSNBC’s dayside news programming, although briefly. Anchor Thomas Roberts followed news of Christine O’Donnell‘s endorsement of Romney by saying, “So you may not hear Mitt Romney say ‘Keep America American’ anymore. That’s because it was a central theme of the KKK in the 1920s, it was a rallying cry for the group’s campaign of violence and intimidation against blacks, gays and Jews. The progressive blog AmericaBlog was the first to catch on to that.”

Here’s the video of Roberts’ brief report, followed by the “campaign ad” cited in the AmericaBlog report:

Update: Inside Cable News points out that, according to Robert Sickels‘ The 1940s, Republic Steel encouraged the use of the phrase in a GI-themed ad campaign, although Sickels doesn’t say whether it ever caught on.

Update 2: An NBC insider tells Mediaite that NBC News President Steve Capus addressed this story this morning at an editorial meeting, and stressed the need for accuracy, fairness, and caution before proceeding. Capus is reportedly furious at the way the story was handled, and MSNBC is in the process of apologizing to the Romney campaign.

Update 3: On Hardball tonight, host Chris Matthews issued a public apology to the Romney campaign for the “appalling judgment” used in reporting this story.

Update 4: Rev. Al Sharpton reinforced the apology on Politics Nation, agreeing that MSNBC “did the right thing” by apologizing:

Update 5: On Jan. 1, The LA Times issued the following correction:

The transcript of the speech used in the web video above, from CPAC 2010, lists Romney’s remark as follows:

We will keep America, America, by retaining its character as the land of opportunity.