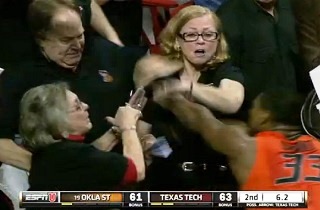 On Saturday night, Oklahoma State star hoopster Marcus Smart shoved Texas Tech fan Jeff Orr following a play that sent the guard into the stands, and which Smart claims was prompted by Orr’s use of a racial slur. Smart later apologized, as did Orr (while denying using the slur), but on Sunday, the Big 12 Conference announced that Smart will be suspended for three games over the incident.

In the closing seconds of Oklahoma State’s 65-61 loss to Texas Tech, an attempted block sent Smart into the stands, where he had words with a fan who was later identified as Jeff Orr, and was caught on video shoving Orr with both hands:

Smart told his coaches that the fan had provoked him with the use of a racial slur, but apologized at a press conference on Sunday. Orr also issued an apology, but would only cop to calling Smart a “piece of crap”:

“I would like to take this opportunity to offer my sincere apologies to Marcus Smart, Oklahoma State, Tubby Smith and the Texas Tech Men’s Basketball program,” Orr said in a statement. “My actions last night were inappropriate and do not reflect myself or Texas Tech — a university I love dearly. I regret calling Mr. Smart a ‘piece of crap’ but I want to make it known that I did not use a racial slur of any kind. Additionally, I would like to offer my apologies to Texas Tech fans that have been embarrassed by the attention this incident has created.”

The Big 12 Conference announced, on Sunday, that Smart will be suspended for three games over the incident:

“Mr. Smart’s actions were a clear violation of the Big 12 Conference’s Sportsmanship and Ethical Conduct Policy,” Big 12 commissioner Bob Bowlsby said in a statement. “Such behavior has no place in athletics, and will not be tolerated. I appreciate the efforts of Oklahoma State University athletics director Mike Holder in addressing this matter, and believe this is an appropriate response to an inappropriate action.”