Newt Gingrich: My Campaign Is ‘Very Alive’ And ‘Go Talk To Tiffany’s’ About My Bill 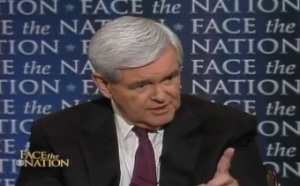 Newt Gingrich appeared on Face the Nation this morning to continue the process of damage control and to hopefully start this week off better than last when he appeared on Meet the Press and suggested his disapproval of Congressman Paul Ryan’s budget proposal. Bob Schieffer was relentless with his questioning, which culminated in such an awkward conversation about Newt’s extravagant Tiffany’s bill that it’s nearly impossible not to feel a bit uneasy while witnessing the exchange.

Schieffer asked Newt how much damage has been done to his campaign, yet Newt insisted even though the national media piled on during the last week, the people of Iowa are still extremely excited about his prospects. Newt suggested, “the campaign looked very, very alive – if you were in Iowa,” an apparent admission on his part that possibly everywhere else it looked very, very dead. After Schieffer informed Newt, “I have not heard one single Republican come to your defense,” the already uncomfortable interview kicked into high gear when Schieffer brought up how “bizarre” it was for someone to run up such an expensive bill at Tiffany’s.

If Newt’s squirming and repeated clearing of his throat wasn’t enough to suggest he wanted the interrogation on the topic to end, his agitated tone throughout this dialogue should be an added clue:

Schieffer: It’s very odd to me that someone would run up a half million dollars bill at a jewelry story.
Gingrich: Go talk to Tiffany’s. All I’m telling you is, we’re very frugal, we in fact live within our budget. We owe nothing.
Schieffer: What did you buy?
Gingrich: It’s a personal – it’s my private life.

As Newt repeated that it was a revolving account and that he was a private citizen, it seems like Newt still might have a few rough patches ahead of him on this campaign trail.