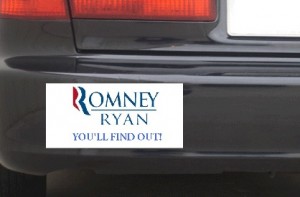 On Tuesday, Republican presidential candidate Mitt Romney threw another twist into the Silly Straw™ that is his position on reproductive rights, telling The Des Moines Register that if elected, he would not pursue legislation . His campaign immediately back-tracked, as did Romney a few hours later, but the whole brouhaha caused running mate Paul Ryan to make one of the most bizarre political declarations ever. After insisting (wrongly) that he and Romney have a position on abortion that’s “consistent and hasn’t changed,” a reporter asked him what that position is.

There are things that politicians say which should, on their own individual merits, make voters question whether that person is qualified to hold scissors, let alone public office (there were about 20 instances of this in Mitt Romney’s hidden camera fundraiser alone), and Ryan’s response to that reporter is one of them:

What is your position? “You’ll find — you’ll — I’m sure you’ll find out in these debates.”

It’s tempting to stop right there, because one of the problems with the Romney/Ryan candidacy is that there are so very many disqualifying moments that they tend to distract from each other, and become so much noise. A reporter asks Paul Ryan for his position on abortion, and he haltingly replies “You’ll find out.”

Really, though, that could be the campaign’s new bumper sticker, since the central policy idea of their candidacy also carries with it a significant element of mystery. How much is the tax cut, and how will they pay for it? You’ll find out. Just trust them.

But it is important to nail down this abortion thing, before it gets away from people. What Romney told the Iowa paper was a carefully-crafted response designed to leave him lots of latitude:

There’s no legislation with regards to abortion that I’m familiar with that would become part of my agenda.

That statement, heralded as some sort of “moderation” of his abortion position, still left him free to appoint anti-choice justices, make anti-choice executive orders, and sign whatever “Forcible Rape/Eggs Are People Too” laws that Congress puts under his nose, plus any anti-choice law that he’s not “familiar with,” so if he still calls it Mr. Personhood Law, it’s cool.

Even with all that latitude, though, Romney’s own agenda calls him a liar, so even this supposed “moderation” is as real as Romney’s math. Fact-checkers, failures that they can be, have decided that since Mitt Romney has held every conceivable position on abortion, then he ought to get credit for all of them (based on Harry Mudd’s Law that since he always lies, he’s also always telling the truth), but if you care for Utero-Americans at all, you don’t want to “find out” later that Romney was telling the truth when he said he would gladly sign a law banning all abortions, or that life begins when egg meets sperm (that means The Pill=Murder). Anyone thinking that Romney is even faking being a moderate ought to wise up.

Or was faking, I should say. In what has become a regular occurrence, the Romney campaign quickly put out a statement which read “Gov. Romney would of course support legislation aimed at providing greater protections for life.”

They use the phrase “of course” a lot in these corrections, either to mean that of course Romney’s true position should be self-evident to anyone with a magic dartboard, or of course Mitt Romney was lying when he said whatever it is we’re correcting. He’s Mitt Romney, bitch!

On Wednesday night’s The Rachel Maddow Show, host Rachel Maddow helpfully took viewers through a brief history of Mitt Romney’s career as a bad freestyle rapper, and accompanying cleanups by his campaign. It is dizzying, but worth watching, and sharing with the low-information voter in your life: