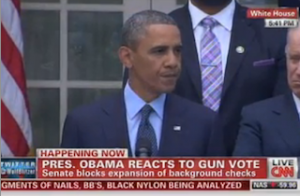 President Obama appeared in the White House Rose Garden Wednesday afternoon to deliver a passionate and frustrated speech reacting to the Senate’s failure to pass an expanded background checks bill for gun purchases. The president’s remarks were preceded by an emotional introduction from the father of one of the children killed at Sandy Hook Elementary School last December. During the nearly 15 minute speech, with families of the Newtown victims standing behind him and former Congresswoman Gabby Giffords at his side, the president tore into the senators who opposed the compromise bill as well as the NRA and other pro-gun rights lobbying groups who fought to defeat it.

Laying out the facts of the Senate proceedings, President Obama remarked that “90% of Democrats” voted yes but “90% of Republicans” voted against it. And even though there was an overall majority in favor, he said, because of the “continuing distortion of Senate rules, a minority was able to block it from moving forward.” Noting the polls that say 90% of Americans support expanded background checks, Obama asked, “how can something have 90% support and not happen?”

President Obama largely attributed the bill’s failure to efforts by “the gun lobby and its allies” who “willfully lied about the bill,” claiming it would create some sort of “Big Brother registry” even though it expressly prevented that. He said the “intimidation” tactics by those groups worked to convince senators from more pro-gun states that their jobs would be in jeopardy if they voted yes. So, Obama said, “they started looking for any excuse to vote no.”

Obama acknowledged that the legislation was far from perfect and “wouldn’t have prevented all gun massacres.” But, he said, “if actions by Congress could have saved one person, one child, a few hundred, a few thousand” then “we had an obligation to try.”

Going after those who will call today’s Senate session a “victory,” Obama asked “A victory for who? A victory for what? All that happened today was the preservation of the loop hole that lets dangerous criminals buy guns without a background check.” And with such a large majority of Americans in support of the measure, Obama asked, “Who are we here to represent?”

Finally, Obama went after critics who accused him of using the Newtown families as “props,” asking, “are they serious? Do we really think thousands of families whose lives have been shattered by gun violence don’t have a right to weigh in on this issue? Do we think their emotions and loss is not relevant to this debate? All in all, this was a pretty shameful day for Washington.”

Despite his obvious anger over the lack of progress on an issue that has come to dominate his second term, President Obama attempted to end his remarks on a positive note. “I believe we’re going to be able to get this done,” he said “Sooner or later, we’re going to get this right.”