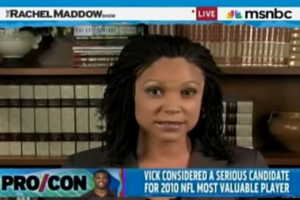 Football person Michael Vick continued winning the slowest news week of 2010 tonight, but the pool of interpretations of this nearly two-year-old incident is rapidly drying up. On tonight’s Rachel Maddow, EP Bill Wolff (filling in for Maddow) brought in Professor Melissa Harris-Perry for a fresh take, and she delivered: Michael Vick is the victim of centuries of black oppression– from dogs? Update: Prof. Harris-Perry clarifies she was given three minutes less of discussion than expected. More below.

Wolff requested of Harris-Perry a “historical” take on the matter, and while she barely mentioned Vick (and said nothing of Tucker Carlson), she gave an extensive history of African-Americans and dogs. “We want to be really careful here,” she warned, “There are some complex issues at stake whenever you are talking simultaneously about African Americans and talking about issues of animal rights.” She explained that “questions about the humanity of black people and the relative importance of the life of animals have in fact been deeply connected,” complicating the issue for Vick. To tie the argument to the story, she noted that domestic animals are often “fetishized” such that, while “we’re not really all that horrified” about fur or food animals, the killing of a dog is a cardinal sin. Compare this to the fact that “one of the ways that black people were enslaved… was that black people were equated to animals,” she continued, and that “dogs were directly used against black people.”

She doesn’t elaborate further than noting that there is a “weird kind of interconnection and anxiety” between animal abuse and civil rights, so it’s left to the viewer to try to figure out how to weave her historical context into the Michael Vick case. In fact, the only comment directly related to the Vick case would be her note that people are often not horrified by the way animals are killed for fur or food.

This leaves many open questions as to what many of her comments– especially the note about dogs being used against African Americans during the Civil Rights movement– have to do with Vick. Carried to its logical conclusion, Harris-Perry could perhaps be suggesting that a reason Vick behaved as he did against dogs was because, as an African-American, he was participating in a long-standing feud with canine-kind. His crime, she may be arguing, was a subconscious expression of racial anxiety, and must be understood as such before condemning Vick the way someone who has not experienced racial strife (ahem, Tucker Carlson) could not understand. Or perhaps she may be suggesting that it was an act of envy and not wrath– “questions about the relative humanity of black people” in the days of slavery led many of vile mind to conclude dogs were a higher lifeform than African-Americans, as dogs and certain domestic animals were “fetishized” into an untouchable innocence.

As the comments are so detached from the subject matter, it’s basically a Rorschach test of political ideology. Liberals will embrace the historical context. Those on the right will cry “race card.” Hopefully Harris-Perry will elaborate further in the future, as, if there was a highly sophisticated historical point directly related to Vick’s dog abuses in her commentary, something was lost in translation.

Update: It didn’t take long for Harris-Perry to clarify via Twitter, emphasizing that she believed she had three extra minutes to explain her point (which likely explains why the chunk of the argument linking Vick to her historical argument was missing) and, in a series of tweets, giving the explanation another shot (the following are her tweets, consolidated, and excluding @replies):

Hmmm. Disappointed w/ my discussion of Vick on MSNBC tonight. Thought I had 3 more minutes. I was trying to offer historical perspective for why black and white Americans often have sharply differing views on animal rights issues.
I gave lecture to Vet school in May on exactly this topic. I had 90 minutes then to make my point. Got a little lost in the weeds tonight. Remember that black people were called apes, put into human zoos, treated as chattel. Equating black people with animals was part of racism. On one hand this dehumanized blacks but it also justified maltreatment of animals, especially those used in agriculture & for food. So many black people have experienced what seems like callous indifference to black suffering from same people who adore/protect pets. This history means there is profound racial divide on issues of animals rights. Even if black person loves pets & white person not racist. Do you remember this image of dogs evacuated in Katrina? It caused great anger when so many blk ppl were mistreated. This does not mean I think Vick’s actions were OK. I have dogs & cats whom I love.
Last spring I taught an AfAM politics course @Princeton. Campus animal rights group brought a very controversial PETA exhibit to campus. The exhibit linked animal cruelty to slavery, imprisonment & the holocaust. Many black students on campus were PISSED about the comparison. I had leaders from both black student org & campus animal rights org in my class. Discussions were heated, powerful. Kids made a film abt it. I worked hard in class to have these conversations be opportunities for learning but emotions ran very high. Completely possible that I’ve explained nothing, but hopefully at least raised some questions. As always Tweeps provoke & engage. Thanx.

This explanation clarifies one important point that was excluded from the program: who exactly she was trying contextualize with the history of African-American oppression and animal abuse: it wasn’t, from this explanation, Vick’s behavior she was trying to explain, but the apparent willingness of African Americans to forgive transgressions like Vick’s more than whites, seeded deeply in the fact that many the dehumanization of blacks throughout history complicates the way they perceive animal abuse. While the explanation stands, it would be great to see her take another, longer stab at explaining her argument on television, as there are likely many viewers who left tonight’s segment nonplussed who wouldn’t take to her Twitter to find a better answer.

Update II: Prof. Harris-Perry has also sent us a link to her lecture slides on the subject she uses with her students, which you can download here.