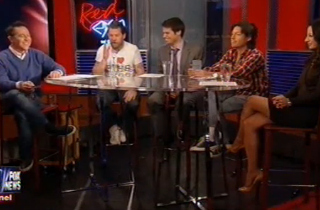 This morning’s Red Eye panel got heated over the topic du jour: the bipartisan proposal of immigration reform via what many have deemed “amnesty” for illegal immigrants currently in the United States.

Daily Caller senior editor Jamie Weinstein expressed support for the Gang of Eight’s plan, explaining that “you can’t force [illegal immigrants] back,” echoing the legislators’ belief that naturalizing the existing immigrants is more reasonable than trying to deport all 11 million people here illegally.

“I know you hate this whole idea,” host Greg Gutfeld then said to a cringing Gavin McInnes. “But what it does is removes the race card. This is going to help the Republicans because they are no longer going to be called racist because they are introducing immigration reform,” Gutfeld explained.

“George W. Bush tried that. He said let’s open the borders. It didn’t work. It just meant more illegal immigration,” McInnes replied before offering his own colorful suggestion for ending illegal immigration: “It’s easy. They are not like the Chinese who can hide in little nooks and crannies — they are a worthy adversary. The Mexican illegal immigrants, all you have to do is do a little tweak. It is called attrition. Make it slightly harder for corporations to hire illegals, and they run home with their tails between their legs.”

McInnes clarified that he wasn’t suggesting we should deport all illegal immigrants, but rather that his idea would force employers to realize “we can’t survive” unless they hire legally. “I come from Canada,” he added. “We have a group of people who do our work; they are called teenagers.”

Gutfeld expressed his belief that some of the proposals “sound pretty good,” adding that the illegal immigrants will just get on the back of a proverbial naturalization line anyway.

“There already is a line, it is called following the rules,” McInnes shot back. “You have a bunch of visas and you pay your dues there and you are sponsored for four years and then you get a green card and then you have citizenship. We have more legal immigrants than all other countries combined. What’s the matter with that system?”

After lawyer Remi Spencer said, “I have an immigration practice in my law firm and I see firsthand what happens.” McInnes interrupted: “Immigration lawyers like it. Oh, I see.”

“What I am saying is it is different when you talk about it in the abstract,” Spencer said. “When you meet a family who has been here for 20 years who paid taxes and who worked hard, these are not the people who should be shipped back to a place where they are either going to be at poverty level.”