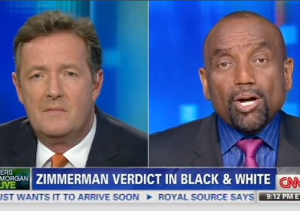 Reverend Jesse Lee Peterson expressed his extreme displeasure on CNN tonight over how the Trayvon Martin case has been covered in the media. He railed against “race hustlers” like Al Sharpton and told Piers Morgan the media is irresponsibly making Martin out to be some kind of “innocent little kid” instead of, in his opinion, being honest about Martin being a young thug.

Peterson said that people like Sharpton and President Obama have only injected themselves into this case to “incite the anger of black Americans and others,” adding that they’ve been “using black Americans by dividing the races” and “intimidating white people to get more power.”

RELATED: Geraldo: ‘You Dress Like A Thug, People Are Going To Treat You Like A Thug… I Stand By That’

Morgan asked Peterson if the outcome would have been the same if instead of Martin, it had been a young white man like Mark Zuckerberg in a hoodie. Peterson said it wouldn’t have mattered, and shot down the “absolute lie” that Martin was “some innocent little kid, tip-toeing through the tulips.” He declared, “Trayvon Martin was a thug. His parents know that, you know that, I know that.”

Morgan interjected, “Don’t you speak for me,” and shot back that there’s no evidence Martin was a thug. Peterson asked why if Martin was “such a good little kid… did they work so hard to keep his history out of the courtroom.” He cited pictures of Martin’s Facebook page featuring him with a gun or marijuana. Morgan moved on, but not before remarking that Peterson’s comments were “quite offensive.”