Rolling Stone Sequel: Which Terrorist Or Mass Murderer Will Be Glamorized Next?
column

Rolling Stone Sequel: Which Terrorist Or Mass Murderer Will Be Glamorized Next? 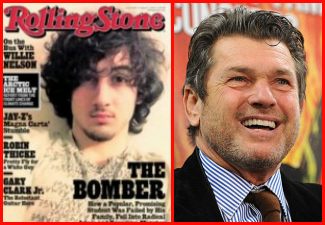 Let’s make one thing clear: The article in Rolling Stone magazine on Dzhokhar Tsarnaev is as well-researched and professionally presented as anything you’ll read in journalism today. Meticulous. Objective. Thought-provoking. A fine job by the author, Janet Reitman.

And that’s why it’s such a shame that the powers that be at the magazine decided to turn a (“suspected”) terrorist into Jim Morrison 2.0 on its cover. All of that research, all of that work by Reitman, all down the drain because of the warranted firestorm surrounding the cover.

When it comes to long-form print media—and especially weekly and bi-weekly magazines—there are no accidents. The Tsarnaev cover was the topic of many meetings and a more than a few revisions before Jann Wenner—the one ultimately in charge at Rolling Stone—finally signed off on it.

Wenner, 67, has been around the block a few times and knew exactly what the reaction would be. He knew controversy would immediately arise. He knew national cable news would prominently debate it. And yes, he knew businesses like CVS and Rite Aid would declare they wouldn’t sell this edition. But with all the attention it’s receiving, and the fact that fewer and fewer folks actually walk into a store and buy a magazine these days, makes it a gamble worth taking. Understand: Rolling Stone gets the bulk of its revenue from subscriptions and advertising revenue, so if CVS, Rite Aid and other stores such as Walgreens doesn’t choose to sell the issue, it’s no real loss for Wenner.

Meanwhile, those maimed and permanently injured by the blasts, and family members of those who lost their lives—a death toll that includes an eight-year-old boy (Martin Richard) who died after Tsarnaev chose to place a bomb directly next to him—have to be reminded of what this monster did once again, as if they already don’t think about it every minute of every day already.

So if you’re Jann Wenner, and you see the “success” this cover had in making your publication the talk of the town for the first time since Almost Famous, you know he’s got to be thinking, “Hmmm…we might be on to something here. How about an in-depth story next month on the Newtown shooter? We can put Adam Lanza on the cover, but make him look just like…I don’t know…Adam Levine! Did Lanza murder 27 people, including 22 little children? Sure. But if people are this pissed off about putting Tsarnev on the cover, just wait until they get a load of Lanza.”

In this fictitious world, Wenner is rolling now. Most of his staff—already underpaid but scared to death of going back to the world of freelancing—is nodding in the same agreement members of North Korea’s officials do when Kim Jong-Un jumps on the crazy train.

Besides lacking taste and good judgment, Wenner is also a sneaky SOB. Why? Because almost all magazines provide a heads-up to its advertisers before going ahead with a controversial issue. This way, if an advertiser doesn’t want to be associated with said controversy, they can pull out of that particular issue.

Wenner, of course, didn’t provide one for the Tsarnaev issue. So if you’re McDonald’s, Gillette, Converse, Coca-Cola or Miracle Whip, or the 15 or so other businesses who bought space in this issue months ago, you’re now stuck being associated with this nonsense. And if there’s one thing companies like these do everything to avoid, its controversy.

Does Rolling Stone have every right to print whatever they please?

But it doesn’t mean we have to buy it.

If you agree that giving Tsarnaev the Hollywood treatment is an insult to everyone affected by the Boston Bombings, cancel your subscription or write any of the innocent advertisers and tell them how you feel about them continuing to do business with Rolling Stone moving forward.

And while you’re at it, write a good ol’ fashioned letter to the following address: