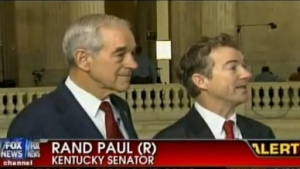 Congressman Ron Paul and his son, new Senator Rand Paul, together appeared on Fox News with Neil Cavuto, and after some joking between the Pauls about whether the House or the Senate was better, the conversation turned serious with the debt crisis. Neither Paul was in favor of raising the debt ceiling outright, but the two disagreed on what it would take for them to get on board and avoid the catastrophe warned of by Austan Goolsbee, chairman of the White House Council of Economic Advisers, if the debt ceiling was not increased.

Ron declared that he is not in favor of raising the debt ceiling saying “I never voted for any of the spending, so why should I raise the debt for the people who’ve been spending the money? For me it’s a very comfortable vote.” Ron admitted if the debt limit isn’t increased it will cause problems, but thought that the alternative of continuing to borrow and spend endless money is much worse, and instead would rather face reality today.