Ron Paul Warns America To Stay Out Of Egypt, Rails Against Foreign Aid In CPAC Speech 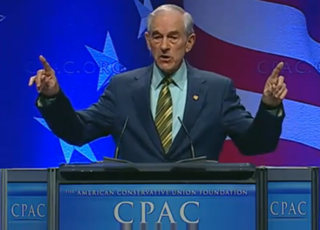 Given the contentious relationship between his followers and many in the conservative movement, it’s safe to say that Rep. Ron Paul‘s address to CPAC this year was one of the more anticipated speeches of the political holiday weekend. And Rep. Paul delivered: railing against the “neo-Jacobins” that passed the PATRIOT Act, calling for drastic cuts in military spending, and a passionate repudiation of the Federal Reserve.

Opening with a jubilant recognition of the results of last November’s midterms– and, especially, the election of his son Rand to the Senate– the tenor of Paul’s speech was mostly combative towards the more military wing of the American right than anyone else. “We’ve given up our devotion to liberty,” Paul lamented, appreciating that, while the PATRIOT Act was now history, the fact that it passed at all was infuriating enough. “The PATRIOT Act has nothing to do with patriotism– they always name it the opposite of what it is,” he quipped. “The PATRIOT Act is literally the destruction of the Fourth Amendment.”

Rep. Paul also spoke to the situation in Egypt, and had a simple solution for U.S. policy: stay away. “We need to do a lot less, a lot sooner, not only in Egypt but around the world,” he noted, railing that “they’re upset with us for propping up that puppet dictator for 30 years,” and the Egyptian people should be. “Foreign aid,” he argued, “is taking money from the poor people of a rich country and giving it to the rich people of a poor country.” The speech also ran the gamut of Ron Paul “greatest hits,” so to speak: cutting defense spending, getting troops out of Germany, auditing the Federal Reserve, and observing civil liberties.

Sure, CPAC has a history of being welcoming to the Congressman– he won the presidential straw poll last year– but in light of every other major news story surrounding the conference so far, the warm reception is particularly telling. So far, this has been a CPAC whose hallmarks have been disgruntled boycotts by family values groups due to the presence of gay conservative group GOProud and the scuttling away of a certain red-blazered conservative icon. That Rep. Paul’s was one of the most well-received speeches there, and it made more of an enemy of neo-conservatives than it did liberals, speaks volumes as to the evolution of a conservative convention that is now more libertarian than ever.