Sanders To Lou Dobbs On Immigration Bill In 2007: ‘I Don’t Know Why We Need Millions Of People’ ‘Coming Into This Country’

With Sen. Bernie Sanders announcing that he is staying in the race against Joe Biden, attention turned to their first one on one debate in Washington D.C. on Sunday, where the Biden campaign has telegraphed publicly, and suggested to Mediaite, that Sanders’ previous votes on immigration will come up again.

Biden previously brought up Sanders vote against an immigration overhaul at the February debate, saying “the only person in here that has a worse record on immigration is Bernie, because Bernie voted against the 2007 bill.” Whenever this topic comes up, Sanders uses the League of United Latin American Citizens (LULAC) as sword and shield, because the national Latino organization opposed the bill, as well. “Unfortunately, LULAC, among other groups, Latino groups, saw that bill having provisions akin to slavery, Joe,” Sanders replied.

When Beto O’Rourke endorsed him, Biden started to say that “the other guy” voted against immigration reform, but stopped himself. Asked about it, a Biden campaign aide coyly suggested it would come up again. Asked for comment, senior advisor Cristobal Alex slammed Sanders for the vote.

“In 2007, Senator Sanders sided with Republicans to kill a sweeping reform package that would have brought six million undocumented immigrants out of the shadows and onto a pathway to citizenship,” Alex said. “The Latino community needs a president who will have our backs — and Joe Biden will do just that, by ending Trump’s disgusting immigration policies and introducing an immigration reform bill in his first week in office.”

A high-level Univision source told Mediaite they expected influential anchor Jorge Ramos, who has been tough on Biden on immigration throughout the primary, to also go after Sanders on his immigration record, which a second Univision source confirmed. But that plan has been thrown into question after Ramos was exposed to the coronavirus and will now not serve as a debate moderator.

A senior Sanders aide said the campaign isn’t worried because he is more progressive than Biden. “We have an immigration platform written by Dreamers on his campaign, so we welcome that debate.”

For these reasons it’s worth examining how Sanders talked about the 2007 immigration bill at the time, and how he has couched his opposition since, ahead of the March 15 debate on Sunday.

In a June 21, 2007 interview on CNN, Sanders was most worried about the “economic implications” of the guest worker programs.

“If poverty is increasing and if wages are going down, I don’t know why we need millions of people to be coming into this country as guest workers who will work for lower wages than American workers and drive wages down even lower than they are now,” he said.

The bill would have legalized more than 11 million undocumented immigrants and created a temporary worker program, while strengthening punishments against employers who hired workers illegally and strengthening border security. At the time LULAC executive director Brent Wilkes said it would “separate families and lead to the exploitation of immigrant workers,” but if this worried the Vermont senator, he didn’t bring it up with Dobbs. 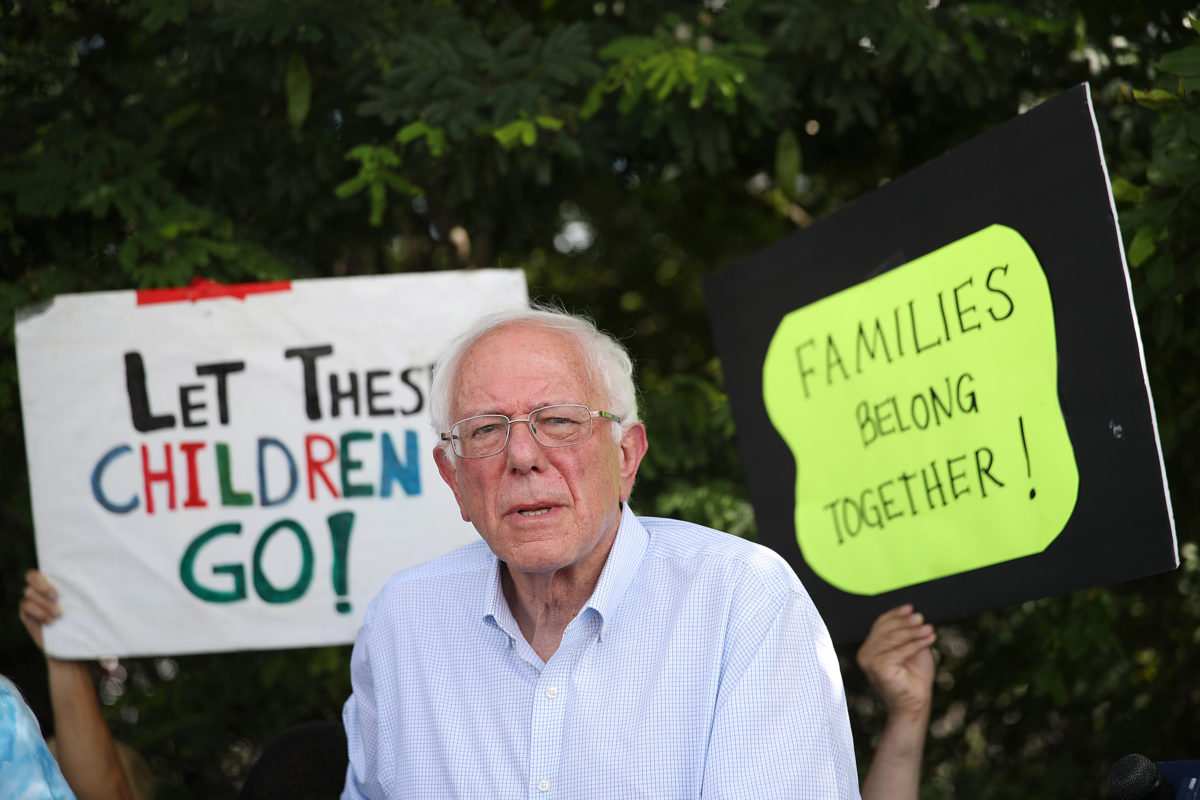 Sanders, as he is now, was also very concerned with “big-money,” “special interests,” leading the way on the immigration bill, but said nothing as Dobbs lamented “socioethnic-centric interest groups” pushing “amnesty legislation” with “very little regard for the traditions of this country, the values of this country or the constituents.”

“And as we know, the principal industries which hire the bulk of illegal aliens, that is construction, landscaping,” Dobbs continued, using the term for undocumented immigrants that many on the right have embraced, but Democrats have since shunned. “Those are all industries in which wages are declining. I don’t hear that discussed on the Senate floor by the proponents of this amnesty legislation.”

Dobbs went on, railing against Bill Gates as a witness to Congress, telling Ted Kennedy “he wanted unlimited H1B visas, obviously uninformed to the fact that seven out of 10 visas under the H1B program goes to Indian corporations that are outsourcing those positions to American corporations in this country and that four out of five of those jobs that are supposed to be high-skilled jobs are actually category one jobs, which is low skill.”

“Well, you raise a good point, in that this whole immigration guest worker program is the other side of the trade issue,” Sanders responded. “On one hand, you have large multinationals trying to shut down plants in the America, move to China, and on the other hand, you have the service industry bringing in low wage workers from abroad. The result is the same — middle class gets shrunken and wages go down.”

By the time February 2016 rolled around, Hillary Clinton was hitting Sanders on his 2007 vote to kill immigration reform. Then, Sanders emphasized different reasoning. “The Southern Poverty Law Center, among other groups, said that the guest worker programs that were embedded in this agreement were akin to slavery — akin to slavery — where people came into this country to do guest work were abused, were exploited.”

A month later, at the Miami debate in March 2016, Sanders debuted a line about LULAC opposing the bill.

“With regard to that 2007 immigration bill, as you may know, LULAC, the major Hispanic organization in his country, also opposed that bill as did many other Latino organizations,” he said. “You know, I think it’s very hard to make the case that Ted Kennedy, Barack Obama, me, La Raza, United Farmworkers, Dolores Huerta, leaders of the Latino community, would have supported a bill that actually promoted modern slavery. That was one of the many excuses used not to vote for the 2007 bill.”

As Clinton did then, Biden said at the debate last month that there would be millions of new American citizens if immigration reform had passed in 2007, which is true.

It’s also true that groups had reservations about the 2007 legislation, which seemed to be less of an issue in the 2013 Senate overhaul. Sanders said he still had “serious concerns” over the guest worker provisions in that bill, but ultimately supported the legislation.

This cycle, Sanders has grown his support from the Latino community across the country, including young Latinos who have always supported him strongly, but also from many of their parents. The issue impacts the community but immigration thus far hasn’t come up often, or in a robust way, in debates.

That could change Sunday.