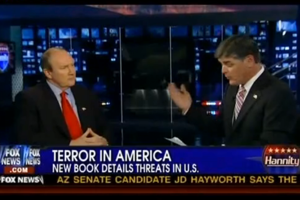 In a world where the creators of South Park receive death threats for dressing up the Prophet Muhammad in a bear suit, it’s fairly surprising to see Sean Hannity bring author Andy McCarthy on the show to discuss his new book, The Grand Jihad, which targets not only terrorist organizations, but also mainstream Islam and the American left, who McCarthy claim are working together to take down American constitutional democracy.

McCarthy (who is not, apparently, the travel writer and the actor from Weekend at Bernie’s) tells Hannity, who predicts his book will cause a large stir, that “it’s an overdue hullaballoo if we’re going to have one,” and that Islam is the most approrpriate name for what Americans are fighting in the War on Terror. It seems that even Hannity is taken somewhat aback by McCarthy’s claims– that Muslims are trying to make Sharia Law a permanent staple in the West and, while they maintain different goals, will work together for their immediate goal before fighting among themselves:

“Both the Islamists and the left see as their main obstacles to the aspirations that they have for the society they’d like to see the destruction of individual liberty and they see as a major obstacle American Constitutional democracy. They don’t agree on all the particulars, but they know… what we cherish as Americans”

As for how they are going to accomplish this exactly, McCarthy explains that “the idea is that you spring up these Islamic communities and get people used to the idea that Sharia Law, the Muslim legal code, should basically govern the day-to-day affairs of that community. And the idea is to sort of build a larger Islamic movement from the ground up.” Of course, makes perfect sense — just a matter of time before we all get used to the idea of Sharia law.

The full interview below: