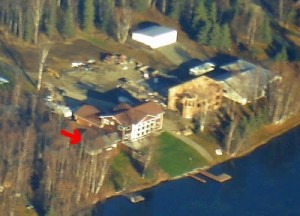 Yesterday, we reported that former Alaska Governor Sarah Palin has “welcomed” a new neighbor, investigative journalist Joe McGinniss. Somehow, this prompted Glenn Beck to urge a boycott of McGinniss’ publisher. While Palin’s Facebook greeting was widely publicized, her yellow insinuations about McGinniss were largely dismissed as “turning the tables.” The Washington Post’s Dave Weigel called her out, and hit the nail right on the head. (h/t Collegepolitico)

I urge you to go and read the whole thing, but here are some key points that Weigel makes:

Palin informs her readers that McGinniss is “overlooking my children’s play area” and “overlooking Piper’s bedroom.” Alternately sounding angry and mocking, she refers to “the family’s swimming hole,” which at first reference sounds like she’s accusing McGinniss of checking out the Palins in their bathing suits, until you realize the family’s “swimming hole” is Lake Lucille. And she posts a photo of the space McGinniss is renting, captioning it, “Can I call you Joe?”

…It’s incredibly irresponsible for (politicians) to sic their fans on journalists they don’t like. And that’s what Palin is doing here — she has already inspired Glenn Beck to accuse McGinniss of “stalking” Palin and issuing a threat to boycott his publisher.

Palin also accuses McGinniss of “yellow journalism,” about which Weigel observes “Palin, who has an undergraduate degree in journalism, should understand that articles don’t become untrue when the subjects don’t agree with them.”

While Ben Smith points out, correctly, that Palin has every right to feel uncomfortable, and to say so, it doesn’t make her particular response any less hypocritical. Even if you grant Palin’s premise that McGinniss is a “yellow journalist,” her implication that he’s a voyeuristic borderline pedophile seems to denote her approval of that journalistic hue.

Finally, since it is Palin who is obsessively blogging about McGinniss’ new, private living arrangement, doesn’t that make her the stalker here? For all we know, that property was the most suitable one available to McGinniss, and he’s just moving in to mind his own business and do his job. It’s not like he is taking to the internet to give updates from the property line. Given that his job is to write about Palin, it’s hard to imagine a more suitable location.

What really irks me about this, though, is that the same people who are all over Barack Obama’s case for ducking reporters are also the same ones who worship the ground that reporter-hating Palin walks on.

Still, my hope for Palin is that this warning shot serves its intended purpose, and McGinniss is dissuaded from wandering over to the fence and asking her some cleverly-constructed “Gotcha!” question, like “Whatcha readin’?”