Stewart Realizes That Despite Web Headlines, He Didn’t Actually ‘Eviscerate’ Anyone 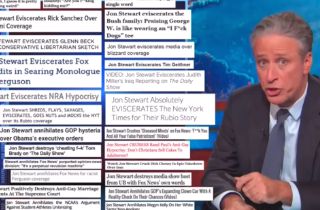 For years and years, plenty of websites (Mediaite included) have written about the many times Jon Stewart has “destroyed,” “annihilated,” or “eviscerated” anything from terrorism to race relations to Fox News.

Well, tonight, on his penultimate night, Stewart discovered that he didn’t actually do any of that.

No, instead, he realized that ISIS, racism, Wall Street, and even Fox are still going strong despite the jokes he told about them. Stewart cried, “What the fuck is going on here?! The world is demonstrably worse than when I started! Have I caused this?! Have my efforts all been for naught?”

But there was one thing Stewart was happy to see change for the better. To find out what it was, watch the video below, via Comedy Central: