Stewart Tears Apart Obama: You Can’t Keep Saying You Found Out About News At The Same Time As Us!
video

Stewart Tears Apart Obama: You Can’t Keep Saying You Found Out About News At The Same Time As Us! 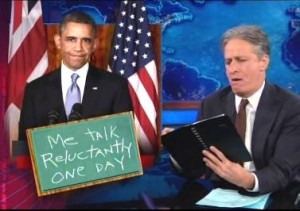 Jon Stewart tonight targeted President Obama for his reactions to major administration scandals in the past week and how every time there’s a big news item involving his administration, Obama always seems to have found out about the news at the same time as the rest of the public did. Stewart found it odd that Obama wouldn’t have found out about IRS targeting Tea Party groups or the Justice Department seizing journalists’ phone records from, say, people inside the government instead.

Stewart noted how at Obama’s big press conference on Monday, there was a “question limit of one, total, from the entire American press corps,” but a reporter smartly exploited a loophole by asking four questions in the same question. Obama began his answer explaining that he learned about IRS targeting in the same news reports that the rest of the public found out about from.

Stewart mocked the blasé manner in which Obama answered the question, and pointed out that this is not the first time Obama has claimed to find out news at the same time as the rest of us. Stewart highlighted how Obama said the same thing about the Fast & Furious ATF gun-running scandal and the time when a low-flying plane freaked out everyone in New York City. And Jay Carney admitted that’s the same way Obama found out about the Justice Department seizing AP phone records.

Stewart quipped, “I wouldn’t be surprised if President Obama learned Osama bin Laden had been killed when he saw himself announce it on television.”

Stewart then brought on correspondent John Oliver, who explained how Obama shouldn’t have had the British prime minister at his press conference yesterday if he wanted a distraction from the press scrutiny, he should have palled around with Prince Harry.