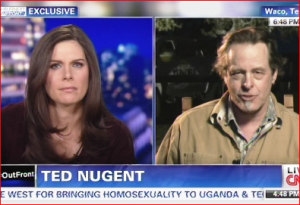 After canceling last week, Ted Nugent finally appeared on CNN tonight, facing off with Erin Burnett over his comment that President Obama is a “subhuman mongrel”. Nugent repeatedly denied he’s a racist, telling Burnett, “We call bad people who are destroying our neighborhoods mongrels,” and there’s nothing racial in his intent. He cried, “I don’t have a racist bone in my body!” Nevertheless, he pledged on the air to stop calling people names and tone down his rhetoric so he can be wield more clarity, and during the interview only referred to Obama as a “liar” whose policies are fundamentally destroying the nation.

Nugent also took some choice swipes at CNN, even invoking the cancellation of Piers Morgan‘s show to take some credit for it, along with a warning to Burnett’s other colleagues.

“For anyone to claim that I’m a racist or it had racist overtones is the typical crap that the propaganda ministry and the media––particularly most of your co-workers there, even though I got Piers Morgan’s ass thrown out, and I’ll do the same with Don Lemon and Wolf Blitzer when I can.”

Nugent’s feud with CNN kicked off last week when Wolf Blitzer confronted Texas Senate candidate Greg Abbott about his connection to Nugent, given Nugent’s past over-the-top remarks about Obama. Nugent subsequently lashed out at CNN, Blitzer, and Don Lemon for their coverage of his remarks.

When Burnett confronted Nugent about his use of the c-word in reference to Hillary Clinton, Nugent said he’s going to stop calling people names like that, but added, “I take a lot of my cues from Bill Maher, your left-wing poster boy, who used the same word to describe the great Sarah Palin.”