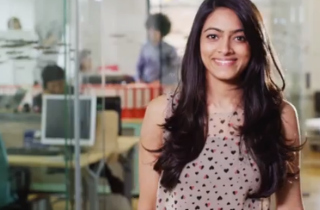 Picture the most nondescript corporation’s boilerplate feel-good commercial you can think of. What do you see? Cliched Americana, sure, tractors, and fields and so on. Suspiciously young scientists and engineers engaged in pseudo-important seeming endeavors, naturally. Attractive, but not too much so, multi-ethnic extras smiling about nothing. Old people. Jargon. So much jargon. The wheels of commerce in motion, literally. You’ve seen it a hundred times by now, maybe in one day alone if you’re in the midst of a particularly heroic sports-coma jag on the couch, and it always conveys the same information: nothing.

That’s was the gag behind “This Is a Generic Brand Video,” a piece by Kendra Eash on McSweeney’s.

See how this guy in a lab coat holds up a beaker?
That means we do research.
Here’s a picture of DNA.

There are a shitload of people in the world
Especially in India
See how we’re part of the global economy?
Look at these farmers in China.

It was effective satire because we could all easily picture exactly what she was talking about. But, just in case you couldn’t, the people at Dissolve, a stock video service, have made the images Eash’ conjured a reality. As AdWeek writes, “You’ve seen all of this footage in ads from major brands. It’s everywhere. And it’s great that a stock video house would so gleefully celebrate the soul-sucking manipulations for which its offerings are generally used.”

Now let’s all go buy one! If only we had any idea what it is we were being sold.