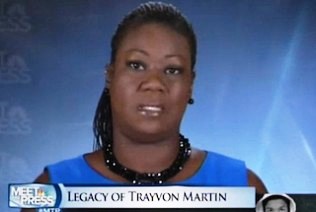 On Meet the Press Sunday morning, Trayvon Martin’s mother Sabrina Fulton denounced New York City’s Stop and Frisk law, arguing that it was part and parcel with the racial profiling George Zimmerman used when he approached Martin before the fatal shooting.

“I think it’s all about laws,” she told host David Gregory. “You have to give, not only civilians, but the police officers the right direction. You can’t give people the authority, whether it’s civilians or police officers, the right to stop someone because of the color of their skin.”

“Arizona has SB1070, New York has Stop and Frisk,” Martin family attorney Benjamin Crump said. “No matter what you want to call it, essentially it’s racial profiling. And we know Trayvon Martin was profiled that night, and he had broken no law, he was just walking home. That’s the problem: when you start this racial profiling, it’s a slippery slope. It’s so bad for so many in the community. Where does it stop? How do we protect our children when you give police or neighborhood watch authority to profile us?”

NYPD Commissioner Ray Kelly had appeared earlier on the program to defend Stop and Frisk. He argued that the Trayvon Martin case had little to do with the law, as Zimmerman was not a police officer.