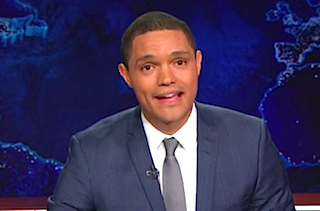 On his first night as host of The Daily Show, Trevor Noah was watched by almost exactly the same number of people who tuned in for Jon Stewart’s farewell episode last month. With 3.471 million total viewers on August 6, Stewart had his second highest rated episode ever. Noah managed to pull in 3.475 million, but that was across all of Viacom’s networks, including MTV, VH1, BET, Nick at Nite and others. On Comedy Central alone, Noah barely cracked the 1 million mark.

That lower number is more in line with what Stewart saw on a typical night — thought it took him over a year to reach that point — and far below the 6.6 million viewers Stephen Colbert had on CBS for his first night hosting the Late Show earlier this month.

In the 18-49 demo, Noah averaged a 0.4 rating Monday night, which is also on par with what Stewart pulled in on average in the months leading up to his finale. That means that so far, at least, the youngest host in late night has not attracted hordes of new young viewers to actually watch The Daily Show on TV.

“To you, The Daily Show viewer, both new and old, at home or on your phone, thank you for joining us,” Noah said at the top of his premiere last night, acknowledging the new viewing reality that is not accounted for in Nielsen ratings.

One thing Comedy Central did to address this issue was post that opening segment on YouTube less than an hour after it aired on the east coast, something that would have been unheard of during Stewart’s tenure. So far, that clip has been viewed more than 625,000 times.