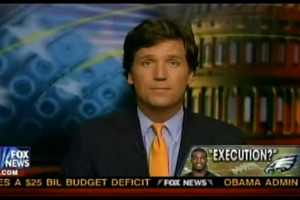 Tucker Carlson made his first return to Hannity since calling for Michael Vick‘s execution, and he had some explaining to do. While he kept strong on his point that he was “disgusted” by Vick’s actions and was shocked to hear President Obama support him, he admitted he may have gotten “too emotional” and “overspoke.”

“Tucker, I take one big vacation a year.” This is how Sean Hannity, retaking his spot at the show from holiday host Tucker Carlson greeted him today. “I take two weeks off, my big vacation, and what do I have to read on the blogs? that you’re destroying the show.” He was joking, of course, but pressured Carlson on his call for capital punishment enough to get somewhat of a retraction. “This is what happens when you get too emotional,” he admitted, though he also added that “anybody who takes the time to look into how he mistreated these dogs and personally tortured them to death gets upset.” That said, he continued, “I overspoke. I’m uncomfortable with the death penalty under any circumstances.”

Hannity, accepting the explanation and admitting to be a huge dog lover himself, questioned whether Carlson believed in redemption. “At some point,” he added, “we have to take our foot off his neck.” Carlson ceded to that, but not before noting that child molesters don’t often get the same chance and insisting that the President was wrong to praise him. “It’s a celebrity culture,” Hannity lamented on that point.

Carlson’s comments via Fox News below: