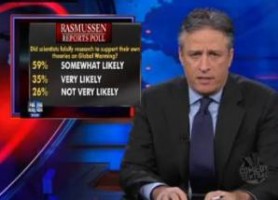 We’re 100% sure this story is going to get a little complicated.

Last night on The Daily Show, Jon Stewart highlighted a graphic on Fox & Friends relating to global warming and, loosely, Climategate. But the numbers didn’t add up – or did they?

This was first brought to light by Media Matters yesterday. The image in question is a full-screen graphic of Rasmussen poll results on Fox & Friends December 4. It seems to show that 59% of respondents said it is “somewhat likely” that “scientists falsify research to support their own theories on Global Warming,” 35% say “very likely” and 26% say “not very likely.” Here’s exactly what co-host Steve Doocy said while reading the results: “About 60 percent of you say somewhat likely, 35 percent say very likely, so you got 90…you got a lot of people right there thinking…it is likely, although 26 percent say not very likely.”

As Stewart says: “So attacking scientists for falsifying data to support their theories on global warming, you’ve cited a poll that adds up to 120%.”

So it’s a mistake – the numbers add up to 120, let’s move on. Except Fox News is defending it. Lauren Petterson, executive producer of Fox & Friends, tells Politico “she sees no error in the graphic.” Petterson says, “We were just talking about three interesting pieces of information from Rasmussen. We didn’t put on the screen that it added up to 100 percent.”

The problem with this explanation is it ignores that the poll actually gave those answers as possibly responses, and, obviously, the numbers were different than F&F showed. As TVNewser points out, here are the actual results:

Those numbers are completely different. The “somewhat likely” figure is actually just 24% while the “not very likely” number is 21%. Instead, someone decided to combine the somewhat and very likely percentage and conclude that equals “somewhat likely” and add up “not very” and “not at all” to get the “not very likely” figure. Why? Cynics would say it makes it look like more people believe “scientists falsify research to support their own theories.” Or you could chalk it up to a simple mistake. But it’s strange to see an outright defense of such a misleading graphic. (Petterson told Politico: “The mistake I do see is we could have been a little clearer here.”)

The rest of the Daily Show segment was spent with Stewart “exposing” that Fox & Friends co-host Gretchen Carlson is actually really smart – which is not always on full display on the show. “From now on I want to see you give it 120%,” he joked.