Which Letterman Should We Believe?

Which Letterman Should We Believe? 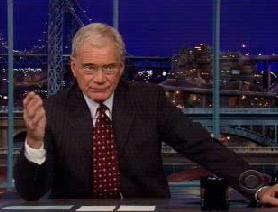 Tonight Dave Letterman goes back on the air after one hell of a weekend. And I’m already confused.

Thursday night — as I’m sure you know by now — he went on the air and told an extraordinary story, first about being blackmailed and then about what he’d been blackmailed for. “Creepy” things, that vague descriptor, was put into a little sharper focus like so: “I have had sex with women who work for me on this show.”

You know, you can’t un-hear that. And it’s not because Dave is no spring chicken — whatever, you can’t deny that he’s a guy with charisma — it’s because you feel you know him, watching him all these years, but suddenly that’s knowing him a little too well. And at first it’s a lot to take in — the blackmail; the $2 million demand; the screenplay weirdness; the revelations that the extortionist was a high-level Emmy-winning producer for CBS; the emergence of Stephanie Birkett, affable on-screen sidekick, as but one of the women; the surfacing of other names, too; claims of a Late Show love nest. Ew. Let’s stop there.

Over the weekend, this all had time to marinate, along with the questions — was there pressure? Was that the way to get a promotion? What about if you weren’t favored by Dave? Were there any legal issues brewing? Would CBS take disciplinary action? Meanwhile, they were removing YouTube clips of the host’s mea culpa in an eyebrow-raising, attention-calling move that ratcheted up the curiosity about what Dave would say tonight.

Maybe that was the point. 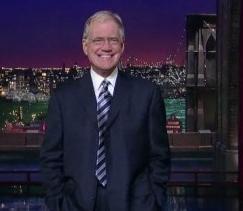 Actually, I can’t tell what the point was — because two narrative emerged from the taping of the Late Show this afternoon: (1) Dave apologized on air, to his staff — and his wife; and (2) Dave told jokes. About it.

As someone who writes about this for a living, this is the order in which I wrote up these stories: First, “David Letterman’s On-Air Apology: “Terribly Sorry” To Staff, Wife.” He said his wife had been “horribly hurt” by the revelations. I chose an accompanying image to match the tone of the apology — somber, rueful.

Then I figured I’d check CBS.com for clips, just in case. Lo and behold, there was a teaser for Dave’s monologue. So I clicked on it. Out he walked at the top of the show, to huge applause. He said “Thank you,” a few times; the applause got louder. Then he grinned, and the audience laughed in response. “Did your weekend just fly by?” he asked, tongue in cheek. So much contained in that sentence — the subtext of all of the above, the punchline present only in the unsaid. “I’ll be honest with you, folks, right now I’d give anything to be hiking on the Appalachian trail.” Ba-dum-bum. “I got into the car this morning and even the navigation lady wasn’t speaking to me.” Rimshot! To accompany this second post, I took a screengrab from the monologue — Letterman smiling impishly.

Now I don’t expect a morose, self-flagellating talk show host — that’s no fun — but the contrast between these two moments is confusing. Which one am I supposed to identify with? Which one am I supposed to forgive? Which one am I less likely to imagine having sex with an intern? The release of both of these images prior to the show sends a mixed message. On the one hand, the apology is what everyone was waiting for. On the other, posting a monologue clip means a return to business as usual…business as usual, that is, with jokes essentially about his wife not talking to him. That’s not to say he didn’t mean his apology, but it does feel a little…disconnected from it.

Which one should we believe? One? The other? Both? Can’t an apologetic Dave still be funny? Can’t a wisecracking Dave still be sincere? Can’t he address the giant elephant in the room and still get back to his routine, because if he’s still there, what else is he gonna do?

Maybe that was the point.