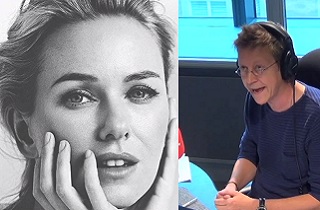 The British press (and, for some reason, Breitbart.com) have been all aflutter over Diana star Naomi Watts‘ baffling walkout during an interview with BBC Radio’s Simon Mayo several weeks ago. In the short clip that has been circulated, Watts abruptly tells Mayo that “I think  we’re getting the wind-up, sorry,” and ends the interview above Mayo’s protests, even though Mayo confirms there was no one else in the room with Watts other than Mayo’s sound man. The full interview has now been released, and sheds some light on Watts’ sudden exit. The interview was to support Watts’ starring turn in Diana, the Princes Diana biopic that’s scheduled for U.S. release November 1.

In this shorter version, you can hear that there’s nothing particularly controversial or objectionable being discussed when Watts suddenly says she’s being told to “wind it up.”

“Okay, we were given ten minutes, and we’ve had eight and a half, which is why we’re still asking questions,” Mayo protests.

“Oh,” a Hannibal Lecter-cool Watts says, “well, I think we’re running late, and we’ve got to go to the next thing.”

“Could we perhaps finish the interview properly, as we started it? Otherwise, we can’t use the interview,” Mayo pleads dejectedly, to no avail. The entire episode has the surreal quality of a Jerry Springer brawl on Valium and crumpets.

Mayo, as you can hear, is properly baffled at the whole thing, unable to figure out what sent Watts into the British equivalent of a berserking rage. Perhaps a review of the entire interview, which Mayo has just released, will contain clues. Pay particularly close attention to the first seven minutes and fifty seconds of the interview, by which time Mayo has broached the difficult topic of location clearances:

There are a few possibilities, the most likely of which is that Watts hung in there for eight and a half minutes, which was 8 minutes more than I did before I had to start skipping ahead. I honestly still have no idea what was said during most of it, and probably never will, because I have what’s called a normal human sleep response. Watts, as a proper Brit, couldn’t just say “Simon, you’re boring the tits off me,” so she concocted an impatient publicist to spare him.

The other possibility is that “we’ve got to go to the next thing” was polite code for some other bit of… shall we say, urgent business, that Watts didn’t think Mayo’s audience needed to hear about.