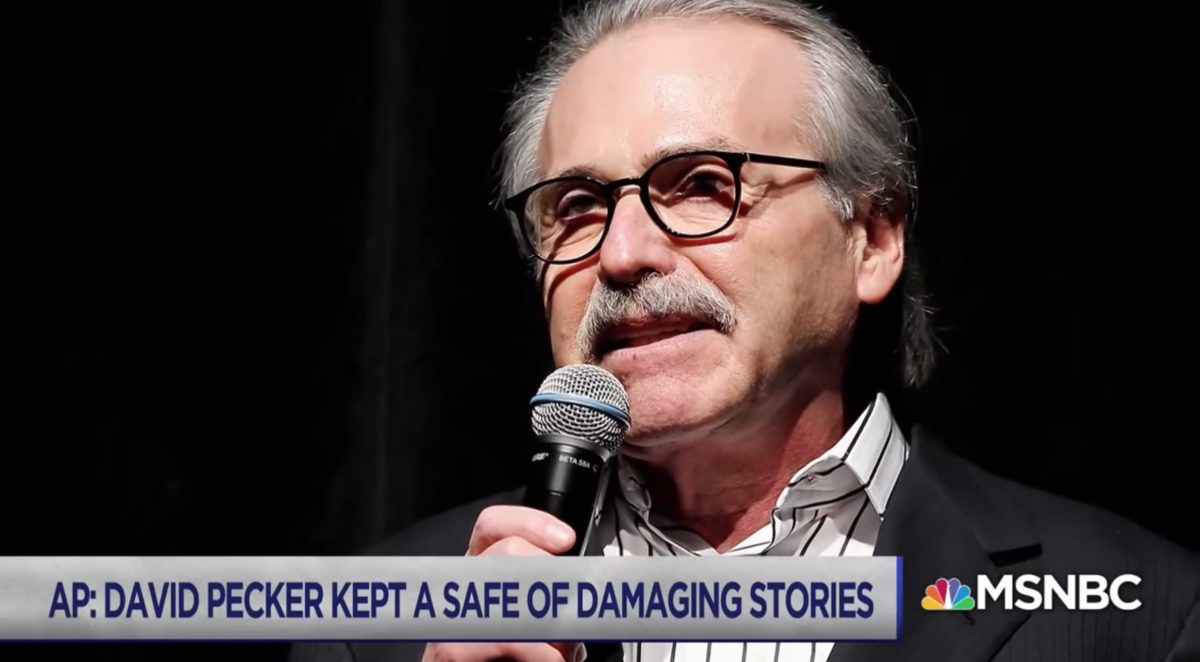 In an all too familiar pattern, this week President Donald Trump has so flooded our public discourse with blatant and dangerous lies that the news media has been distracted by trying to contain the runaway waters, causing them to once again largely miss another story. This time, the story in question is the most significant element of Trump’s jaw-dropping affiliation with the National Enquirer tabloid.

Since the 2016 presidential primaries, it has been maddening to watch the news media sit back and watch the supermarket rag, run by Trump’s good friend David Pecker, overtly act as an arm of the Trump campaign while pretending to be basically the same as Fox News, only less relevant. In other words, biased in his favor, but nothing out of the range of normal for this media era dominated by “journalism” with a point of view.

I was one of those observers screaming at the time that there had to be something else far more nefarious going to explain both their unconcealed Trump cheerleading and their contrived stories brutally attacking his opponents, most famously Ted Cruz and Hillary Clinton, at very key moments. Well, thanks to Michael Cohen’s tape and guilty pleas, we now know for sure that the National Enquirer was effectively just as much a key component — likely an illegal one — of the Trump campaign as a mob boss’s “muscle” is part of their underground gambling operation.

The New York Times finally did some further digging into this extraordinarily troubling relationship (the details of which, had they been known early in the 2016 primary season may have cost Trump the GOP nomination) between Trump and Pecker’s outlet. They found that Trump had tried to purchase all the compromising material Pecker had accumulated on his “friend” over the many years, but was unable to do so (which seems really weird for a guy who is supposedly so rich!)

The clear implication of the story is that Pecker and his various magazines literally had Trump blackmailed during the campaign, when he took office, and maybe even still do so today (note that, despite Pecker supposedly having “flipped,” Trump has never tweeted a negative word about him). And yet, once again, almost no one in the news media seems to be connecting all the potentially very important dots here.

There are at least three elements of this equation which even the anti-Trump mainstream news media seems either unwilling, or unable, to properly calculate.

The first is that Trump clearly knew when he took the oath of office that one of the most unscrupulous “media” companies on the planet had the ability to blackmail him, and thus the United States, at any time. For Trump not to have, at the very least, moved heaven and earth to remove that leverage over him, for the good of the country, was a clear dereliction of his duty.

This would be a lot like deciding to get married to someone without telling them you have terminal cancer, only worse because in this case he had it within his power to remove their ability to compromise him by either paying up, or publicly divulging what they have on him. Instead, we have no idea what he may have done for AMI or an ally of theirs, or what they might have asked him for, given their position of extreme leverage over him.

Secondly, it is stunning that, with all of the extreme skepticism, even by some anti-Trump commentators, that Trump may be so incredibly soft on Russia and Vladimir Putin because they have “kompromat” on him, there has not been more of a connection made here. Think about it. We now know that a simple tabloid magazine has a “vault” of incriminating information on our president, so why would it be such a leap that a former KGB agent, with unlimited resources, from a country who has had possible deep financial ties to Trump, would have even more powerful blackmail material?! (Heck, how do we know AMI didn’t sell the material on Trump to Putin or some other foreign government?!)

In other words, doesn’t this entire story make the findings of the Steele dossier significantly more plausible?!

Finally, given that it is clearly the modes operandi of the National Enquirer to use scandalous information to get prominent people to do their bidding (I urge people to remember what they did to Tiger Woods), why has there been no real speculation that this may be the real explanation for some of Trump’s most head-scratching support? I have already written about Trump super-fan Sean Hannity’s very odd unwillingness to criticize Trump’s new arch-enemy Michael Cohen. Wouldn’t being blackmailed by the National Enquirer (or Russia, or both) explain the seemingly inexplicable, and very sudden, Trump sycophancy of previously highly credible people like, for instance, senators Rand Paul and Lindsay Graham?

Obviously, there is no proof of a connection between these two potentially totally unrelated circumstances, but given the way things appear to be headed, we shouldn’t be so quick and naïve as to discount seemingly insane scenarios which just a few years ago would have seemed completely absurd for even a movie. The news media has already done that far too much, and used their imagination far too little, when it comes to estimating the level of corruption surrounding Donald Trump.