Hmmm… Why Does Sean Hannity Seem So Hesitant to Criticize Michael Cohen?
Opinion

Hmmm… Why Does Sean Hannity Seem So Hesitant to Criticize Michael Cohen? 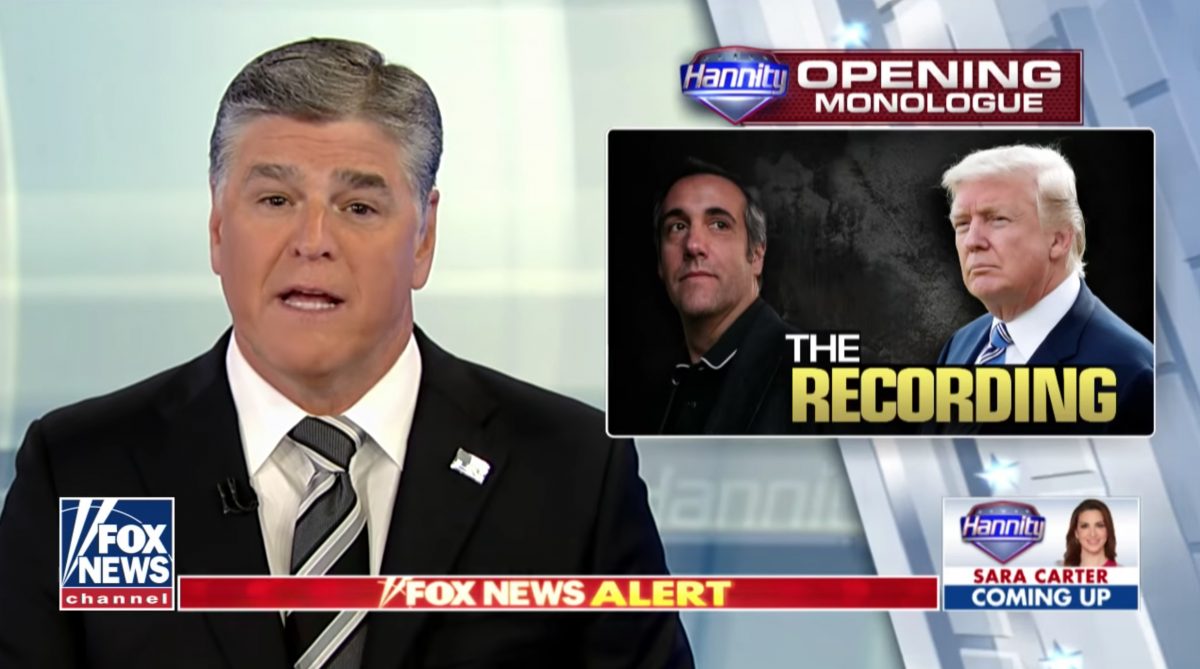 It is unquestioned that, since nearly the start of his presidential run, President Donald Trump’s most consistent and aggressive media defender is Fox News and talk radio host Sean Hannity. Hannity has even gone to the insane lengths of accusing murder victim Seth Rich of having been killed, presumably by the DNC, because the Democratic aide supposedly gave the party’s emails to WikiLeaks during the 2016 campaign (he didn’t).

In short, there has been no issue too absurd, or position too hypocritical, for Hannity to immediately dive into the fight on behalf of the man who reinvigorated his media career by injecting his shows with ratings steroids. That is, until Michael Cohen recently appeared to “flip” on Trump.

In the last week, it has been revealed that Cohen, Trump’s former personal attorney, secretly taped Trump during the height of the presidential campaign, and that he is willing to testify that Trump was very much in the loop on the infamous Trump Tower meeting with the Russians. Even though that specific tape may not have much real significance, and everyone with a brain already knew that Trump is lying about the meeting (or meetings?!), there is zero doubt that in Trump World, Cohen has become public enemy number one.

And yet, very strangely, Hannity has been uncharacteristically reserved when it comes to his comments on Cohen. His first statement on Cohen’s apparent “flip” on Trump was so hilariously tentative and noncommittal (he still referred to Cohen as a “friend”) that NBC’s late-night host Seth Myers brutally mocked him for it.

Even more bizarrely, Trump called into Hannity’s radio show after all of last week’s “bombshell” Cohen news broke and, unbelievably, the subject of Cohen somehow NEVER EVEN CAME UP! Forgetting the extreme malpractice involved in a talk show host failing to ask the president of the United States about the biggest news of the week, Hannity’s overt hesitancy to engage fire would be like Sylvester Stallone’s trigger-happy Rambo character suddenly deciding to hold off on shooting at some advancing Viet Cong.

There are two obvious theories about what is really going on here. The first might be called the “Good Cop-Bad Cop Conspiracy Theory.”

In this scenario, Cohen has only appeared to “flip” on Trump but in reality he is actually still doing the Trump Team’s bidding. He’s destroying himself as a credible witness and allowing Rudy Giuliani to dump out, along with his premature spin, as much bad news as possible now so that, once Robert Mueller finally gets to it, we all think it is “old news.” There are intriguing aspects to this concept (has anyone else noticed that Cohen’s is still one of only 47 accounts which Trump “follows” on Twitter?!), but it requires way too much chess playing for a group of people who appear to have difficulty mastering the intricacies of the children’s game Candyland.

The second theory is much simpler and far more in keeping with the principle of Occam’s Razor. In fact, it’s only real weakness is that it may be too freaking obvious.

After it was revealed in court earlier this year that Hannity was Cohen’s mysterious “client number three,” the talk show host went out of his way to diminish the nature of their relationship. He claimed that to call him a “client” of Cohen’s was not accurate and that he had only asked his friend for some informal advice on matters of real estate law (to be fair, Hannity is a huge owner of real estate, though it’s unclear what special expertise Cohen has in that area).

However, Hannity downplaying his association with Cohen back then has, at least in the logical world, opened him up to very serious questions now. Why the heck would Hannity avoid even mildly criticizing Cohen once he went after his own meal ticket, if their connection was no big deal and really only as a tangential result of his friendship with Trump? In what world does a talk show host stay on the fence when the president of the United States — to whom he is deeply devoted — gets into a heated battle with some guy he introduced him to who gave him some minor real estate advice and soon might be going to jail?!

It seems rather apparent that, for whatever reason, Hannity is treating Cohen a lot like Trump treats his wannabe pal Vladimir Putin. Perhaps while we are all trying to figure out what exactly it is that Putin has on Trump, we should start to consider what kind of material Cohen has on Hannity.

There may indeed be a logical and innocent justification for why Hannity is, at least so far, taking a dive on Cohen, but it would have to be a really good one. If there is such an explanation, it would probably be the first time that has happened in this entire bizarre saga.