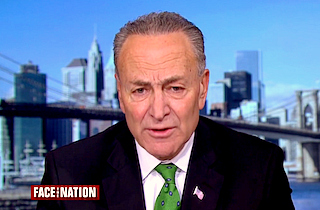 I hope you’re sitting down, because it appears that Democratic New York Senator Chuck Schumer has taken a position not out of principled conviction, but because it grants him political gain.

Schumer spoke out Sunday on ABC’s This Week against Republican senators’ plans to filibuster any judicial nominee nominated by Barack Obama in his final months in office.

Here, he doesn’t even know who the president’s going to propose and he said, no, we’re not having hearings; we’re not going to go forward to lead the Supreme Court vacant at 300 days in a divided time.

This kind of obstructionism isn’t going to last. And you know, we Democrats didn’t do this. When in the — we nominated — we voted 97-0 for Justice Kennedy in the last year of Reagan’s term.

That last line of Schumer’s is somewhat misleading by the way. The only reason Kennedy was nominated in the last year of Reagan’s term was because Senate Democrats blocked and voted down his first two choices the year earlier.

But more importantly, Schumer took the exact opposite stance nine years ago, going out of his way to bluntly tell the George W. Bush administration that he would filibuster any Supreme Court nominee they put forward in the next two years because he didn’t care for the ideology of his previous two nominees.

“We should not confirm any Bush nominee to the Supreme Court except in extraordinary circumstances,” Schumer said. “They must prove by actions not words that they are in the mainstream rather than we have to prove that they are not.”

This speech was delivered July 27, 2007. So Schumer – who now balks at the idea of a 300-day delay in appointing a Justice – would have been perfectly okay with filibustering a Supreme Court nominee for 543 days.

The coming battle over Antonin Scalia‘s vacant seat on the Supreme Court will make hypocrites of most in Washington, of course. Democrats and Republicans alike want the Senate to act as a rubber stamp when they control the presidency, and believe nominees should be scrutinized and blocked when they don’t. So basically anyone who was in office during the Democrats’ obstruction of Bush’s judicial nominees will end up with egg on their face one way or the other.

But usually, this comes in the form of broad, sweeping statements (see: J.D.’s piece about Mitch McConnell today). Here, Schumer is unambiguously guilty of having once done the exact same thing he now excoriates Republicans for doing. It’s only a shame host George Stephanopoulos didn’t have the wherewithal to call him out in front of a national audience.