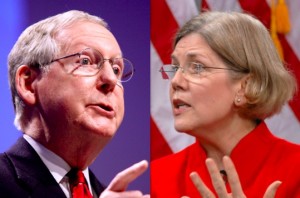 It only took one hour following the official news that Supreme Court Justice Antonin Scalia had died for Senate Majority Leader Mitch McConnell to offer a response. In his Saturday evening statement, McConnell said that the vacated position should be filled after the 2016 election as opposed to sometime during the eleven remaining months of President Barack Obama‘s administration. McConnell said, “The American people should have a voice in the selection of their next Supreme Court Justice. Therefore, this vacancy should not be filled until we have a new president.”

Early Sunday morning, Massachusetts Senator Elizabeth Warren blasted Senator McConnell’s attempt at a delay, taking to her Facebook page to let her thoughts be known on the constitutionality of a judicial appointment during the final year of a Presidency. Warren could have dropped the mic in her battle with McConnell following the line, “Senator McConnell is right that the American people should have a voice in the selection of the next Supreme Court justice. In fact, they did — when President Obama won the 2012 election by five million votes.”

But, it was part of a longer post of Warren’s, in which she sarcastically noted that she could not find the clause in James Madison‘s Constitution that indicated a precedent for McConnell’s claims: