A pro-Trump activist who bragged about how the next four years would be “the greatest” has now been charged with several criminal counts in the Capitol insurrection based, in part, on his own social media post.

After a deluge of outrage hit him in response, Straka tried to shrug off the backlash, saying: “If the reaction to this tweet from blue checks is any indication, this is going to be the greatest four years on social media EVER.” 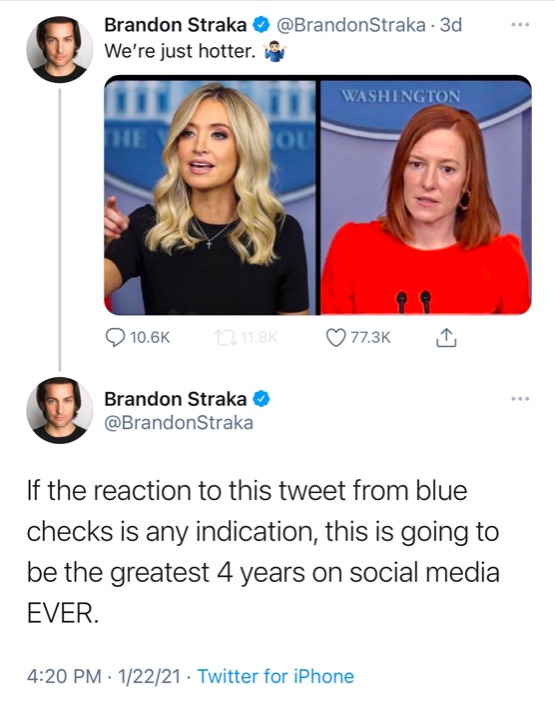 Mediaite is posting the images of Straka’s tweets above because he has since locked down and protected his account. Perhaps not coincidentally, Straka has also now been charged with participating in the MAGA mob that stormed the Capitol nearly three weeks ago and the supporting evidence for the charges was found on Straka’s own social media accounts.

Feds quote quite a bit from Straka’s tweets — “Also- be embarrassed & hide if you need to- but I was there. It was not Antifa at the Capitol” — and say there’s video of him urging crowd to take a Capitol police officer’s shield pic.twitter.com/dSVoya13OT

A federal criminal complaint in U.S. District Court named Straka as impeding law enforcement, trespassing, and engaging in disorderly conduct to disrupt Congress — and cites several of Straka’s own videos of posted on Twitter.

Later on January 13, Witness-1 contacted me to advise that he/she had found a copy of
the STRAKA video on YouTube. Witness-1 advised that the video was the same video that
he/she had previously viewed through STRAKA’s Twitter account. Witness-1 then sent me a link to a video on YouTube titled “Straka attacking the Capitol on Jan 6 .” The video description read, “Fair use historical record of Brandon Straka storming the Capitol on Jan 6.

Straka’s previous claim to infamy, before possibly incriminating himself online, came this past summer. It involved getting kicked off a flight and subsequently permanently banned from American Airlines for refusing to put on a mask. Straka had claimed at the time that he had a medical condition that prevented him from wearing a mask. But he also admitted to the air crew that he had no proof of such a condition and also, just before getting removed from the aircraft, Straka had tweeted that his reason for refusing to wear a mask was “sanity.”